See what the scantily clad Ayumi has up her proverbial sleeve.

X-Blades' star Ayumi has already had an opportunity to show us what she can do with swords and guns in this fast-paced hack-and-slash game, but SouthPeak Interactive stopped by to update us on how the deadly girl with long, golden locks is doing on her adventure. In our short demo, we jumped ahead in the game to face a giant wave of monsters to get an idea of just how frantic and chaotic the gameplay can get.

Before jumping into the action, we learned that Ayumi is a treasure hunter for hire who has found a map to a powerful artifact. Given that her only source of income seems to be finding and selling artifacts, she has tracked down an artifact that has the power of the gods. However, we learn that now she's cursed, and so her new goal is to figure out a way to remove the curse. That was what we were told in a nutshell, but we also heard that the story would develop further and expand to introduce villains, rivals, and allies. We don't quite know yet how the story will unfold, but it's fairly obvious that the main focus here is not so much the story but the nonstop action.

SouthPeak described how developer Gaijin wanted to integrate the three forms of combat into one seamless system. Switching between melee, pistol, and magic attacks is easy because it's all mapped to the corresponding button. The right trigger fires the gun, X is for melee attacks, and the bumper buttons along with Y and B are mapped to magic spells. When facing an enemy horde, you'll find that some can be easily defeated with the gun, especially if they're hovering in the air. Ayumi is graceful and quick on her feet, but you can't simply hack your way through everything, which we found out the hard way. Smaller critters cannot be harmed by melee attacks, so using magic to cast an area attack is much more efficient. The fighting flows faster than your usual button-masher, but you can hold down the melee button to slow down things for just a moment, similar to bullet time. From what we've played, it doesn't seem that this will help you in a huge way, but it does change up the battle pacing and it looks cool.

As Ayumi traverses the 40 or so dungeons throughout the game, she'll find new abilities and also unlock some that need to be purchased. By collecting souls, which are the equivalent of experience points, she can use them to purchase new spells, abilities, and even healing items. Healing items come at a hefty price, so spend wisely. Considering that you have a limited pool of experience points to spend, you'll have to decide whether you want to focus more on spells or upgrading guns. This lets you customize Ayumi to your style of gameplay.

We only had the opportunity to run through a couple of levels that were indoors, but SouthPeak pointed out that there would be outdoor levels. Later, we were brought to a bridge that overlooked the sea with a great view. The game is not complete yet, so potential exists for there to be some gorgeous environments by the time it's finished. Minigames have also been included recently to change up the gameplay, but we weren't able to play any on this version. All of the cutscenes feature voice acting, and we were told that there are multiple spoken languages and subtitles to select. The game comes with three initial difficulty settings: very easy, easy, and normal. Hard difficulty will be unlocked once you've beaten the game. Gaijin also has plans to release an expansion after the games come out to add four to eight additional levels via Xbox Live and the PlayStation Network.

X-Blades has been given a release date and will be coming to the Xbox 360, PlayStation 3, and PC on December 30. Be sure to check back soon for additional X-Blades coverage. 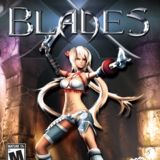