WWF Royal Rumble is a departure from the standard fare of modern wrestling games and is more reminiscent of old arcade wrestling games. But do wrestling fans really want a beat-em-up?

While it was originally thought that WWF Royal Rumble would essentially be an upgraded take on WWF SmackDown!, the game really differentiates itself from just about every other console wrestling game released in the last five years. The game is definitely rooted in arcade-style play, and as such, it has more in common with the old arcade game WWF Wrestlefest than with any other current product.

WWF Royal Rumble has two modes. Yes, you read that correctly: two. Exhibition mode lets you choose a wrestler as well as his partner, who stands outside the ring until you call him in for occasional King of Fighters-style quick attacks. These helper moves can be used as many times as you like, but each of your three helper attacks must recharge before they can be used again. Some moves are simple, like commanding your partner to storm the ring with a baseball bat and take a swing at your opponent. Some are double-team moves, while others command the partner to toss you a weapon. Exhibition mode plays out like a fighting game - it has short intros with a versus screen, and the matches don't last longer than a couple of minutes, as the wrestlers are knocked out if their health bars are completely depleted. The other mode is the royal rumble, which features nine (!) wrestlers in the ring at once. Needless to say, it can get a little hectic, and it's occasionally difficult to face the right foe. The object of the rumble is to eliminate wrestlers by knocking them over the top rope and onto the arena floor. The mode operates on a three-minute timer. Every time you knock someone out, 20 seconds are added to your timer. Knocking out larger characters (denoted by an S symbol near their feet) nets you a 40-second bonus. If you are knocked over the top rope or time runs out, it's game over, and you must push start to continue - it's almost as if you expect the game to ask you for a quarter first. The mode continues until you have personally ejected the proper number of wrestlers, which defaults to 30, but can go as high as 90.

One real weakness in the game right now is the character roster. Though all the major WWF superstars are featured, the game doesn't really have depth in its ranks. We can sit back and hope that THQ is adding more characters, but the game is close to being finished, so it looks like this is what we're going to end up with - unless the hidden character roster eventually includes more than just Vince and Shane McMahon.

The game takes a different approach to special moves as well. Each time your supermeter fills up, you're given an S. It takes three S's to execute your special move, like the Stone Cold Stunner or Rock Bottom. But your special meter can be used for much more than that: Just about anytime you need a little extra boost - say you're dangling on the outside of the ring, hanging onto the bottom rope for dear life - you can hit the R button, and for the low, low price of just one S, you can roll right back into the ring. You can also get out of pins this way, even when your wrestler is dangerously low on energy. It's an interesting and innovative way to manage the special meters, and it lends the game an even larger arcade feel than it already has.

While the game may seem a bit shallow, it's definitely a lot of fun, especially with four players. WWF Royal Rumble is currently scheduled to hit the Dreamcast in early August. 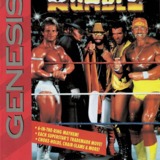