With the release of the well-received fighter UFC 2009 Undisputed, and the announcement of EA's Mixed Martial Arts game, many may have already forgotten the traditional wrestling game, which for troubled publisher THQ represents a quarter of its profits.

Today THQ has announced the latest in its string of wrestling games, which to date have sold more than 47 million units worldwide, with WWE SmackDown vs. Raw 2010. The game, which is due to hit the Xbox 360, PlayStation 3, PSP, Wii, and DS this autumn, is to be developed in conjunction with toy maker Jakks Pacific, with whom THQ has had something of a love-hate relationship.

The publisher has not given details on gameplay improvements, but has promised to "deliver player freedom never before experienced in the SmackDown vs. Raw franchise." The game's cover will also feature WWE superstars John Cena, Undertaker, Randy Orton, Edge, and Rey Mysterio.

THQ will be unveiling more on the game at the SummerSlam event in LA on August 23, and will be running down a history of the franchise at this year's Electronic Entertainment Expo. Keep an eye on GameSpot's E3 page for more. 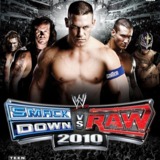