THQ San Diego walks us through all of the game modes in the upcoming arcade brawler.

If you've been following WWE All Stars, you'll know that the game offers an over-the-top style of wrestling where little things like rules and physics don't carry a lot of weight. Such a game seems like a great opportunity to get creative with the usual selection of match types, so we chatted with senior designer David Friedland to see what fans can expect from All Stars' various game modes.

GameSpot: Let's start with the basics. What are the standard game modes that you knew you had to have in the game--those cornerstones of any wrestling title? How are you trying to make them stand out in All Stars?

David Friedland: When we began development on WWE All Stars, we looked at every major match type in WWE history and prototyped most of them. Ultimately, we went with the match types that best supported our fast-paced, over-the-top and arcade-style gameplay. These include standard 1 vs. 1, Triple Threat, Fatal 4 Way, Tornado Tag, Elimination, Extreme Rules, and Steel Cage. In addition, we added two progression modes: Path of Champions and Fantasy Warfare. These modes are similar to the ladder progressions you find in modern fighting games but with a unique WWE style.

GS: How about the more "out there" match types? Tell us about the other modes in WWE All Stars and what players should expect out of these.

DF: We have taken a number of liberties with the standard WWE match rules in order to better accent our gameplay style. Falls count anywhere. There are no count outs or rope breaks, and the only way to get disqualified is to bash your opponent repeatedly with an object. Standard Tag Team has been replaced by Tornado Tag, where all four competitors are in the ring at the same time. In Steel Cage matches, your ability to escape is tied to the amount of damage you do to your opponent, forcing players to mix it up rather than simply attempting to climb out right from the start. All of these decisions were made to support the pacing of the game and eliminate anything that took away from the depth of the combat system. We also wanted to make certain that all of our match types were playable online.

Fantasy Warfare is a mode that will have huge appeal to WWE fans. These 15 matches pit WWE Legends of yesterday against WWE Superstars of today to determine the best of the best in a number of categories. Some of the matchups may seem obvious. Who else would compete for Greatest Big Man besides Andre the Giant and Big Show? Other matchups focus more on personality or lifestyle than physical attributes. In the Superior Lifestyle matchup, beer-drinking hell-raiser "Stone Cold" Steve Austin faces off against the straight-edge CM Punk to determine the better role model. Each of these matchups has an accompanying video package highlighting the buildup to the match. WWE really knocked it out of the park with these videos. WWE Legends and WWE Superstars who have never competed against one another now appear to have actual rivalries going.

GS: Can you talk about the creative process behind coming up with these game modes? How you went from the initial batch of ideas to what ultimately made it into the game?

DF: Ultimately it was about the gameplay. The pacing of WWE All Stars is very different when compared with previous WWE games. Some match types lent themselves well to our style. Four-player matches, for example, are gloriously chaotic affairs with their own special strategies. With Steel Cage matches, the WWE All Stars environment is perfectly suited for huge, high-flying moves. Some matches, with object-oriented victory conditions, did not make the cut, as accomplishing the victory conditions was either too easy at our game's speed or caused too much of a slowdown in the action for our tastes.

Fantasy Warfare was a lot of fun to create. The development team at THQ San Diego has many diehard, lifelong WWE fans who have been watching these WWE Legends and WWE Superstars for many years. Everyone on the team had matchups they wanted to see, and the ideas flowed freely. Once we had the roster finalized, Fantasy Warfare really started coming together. As stated earlier, while some of the matchups were easy to imagine, such as Hulk Hogan vs. John Cena or Andre the Giant vs. Big Show, others required thinking outside the box. In the end, we came up with 15 matchups that really showcase the personalities and abilities of our roster.

GS: One of the big parts of WWE All Stars is the idea of different classes with distinct advantages and disadvantages against one another. Can you talk about how the class system affected the creation of these modes and how their interactions might differ from a standard one-on-one match?

DF: The class abilities definitely have an impact on some of the match modes. Nowhere is this more apparent than with the Acrobats and Big Men. Acrobats have some unique advantages in Steel Cage matches, where they can leap up to the sides of the cage walls and rebound off for high-angle attacks on their opponents that are very hard to defend against. In three- to four-player matches, the range of an Acrobat's turnbuckle moves make them especially dangerous, as opponents are never quite sure who they are going to attack next. Three- to four-player matches are also where the Big Men truly shine. Their ground stomp juggles can often pop multiple opponents into the air at once. Their ability to punch or kick an opponent out of the ring makes them great partners in Tornado Tag, allowing them to easily create distance between the opposing partners so they can double-team a single opponent.

GS: How much of an influence on the design of these modes was the decade-spanning collection of WWE superstars you have in the game? The sport has changed a lot over the years, so how did you make sure that each type of match would work well with, say, an '80s Superstar and a modern Superstar?

DF: Most of our match types were popular throughout WWE history, and all of the WWE Legends and WWE Superstars in our game have all the tools they need to compete in these match types.

Where our roster really influenced our design was in the Path of Champions and Fantasy Warfare modes. Path of Champions has three separate paths players can select, with each tailored to a different era in WWE history. In the WWE Legends path, players are up against old-school Undertaker--back when he was managed by Paul Bearer. All of the opponents in this path are WWE Legends themselves. The WWE Superstars path has a more modern feel, with players confronting "The Viper," Randy Orton, and other current WWE Superstars. The Tag Team path offers the best of both worlds, with players competing for the right to face D-Generation X, the popular tag team featuring WWE Superstar Triple H and WWE Legend Shawn Michaels. This path features a mix of both WWE Legends and WWE Superstars as opponents.

Fantasy Warfare is all about the roster. With the WWE All Stars roster evenly split between WWE Legends and WWE Superstars, it was a matter of finding the best matchups and best themes and then working with WWE to create pay-per-view-quality video packages to accompany each matchup. Initial reaction to these matchups has been hugely positive, and we can't wait for the gaming public and the WWE Universe to get the chance to play through Fantasy Warfare in its entirety.

GS: Thanks for your time, David! 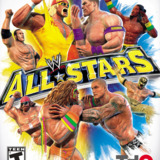