Finally, Ted DiBiase is playable and not just a manager.

Every year, 2K's WWE series boasts an incredibly large roster, and this year will be no different. Before the newest announcement, there were already over 140 playable characters in WWE 2K19. Now, a new batch of legends have been revealed. Get ready to book some dream matches.

Smackdown superstars Rusev and Lana hosted the video from 2K once again, and they were joined by Cesaro and Sheamus. Throughout the presentation, some huge names from the past were revealed, including Ted DiBiase, Mr. Perfect, Big Boss Man, and more. In total, so far, there are over 180 playable in this game now. It's one of the largest rosters for the series to date.

This year's game features the return of Showcase mode, where you play through a WWE superstar's career. This time around, Daniel Bryan is featured. You'll start the story in his first WWE match against John Cena, when Bryan was called Bryan Danielson. From there, you'll traverse his journey to become WWE Champion, his early retirement from injury, and his triumphant return to WWE.

While WWE 2K19 is coming to PS4 and Xbox One, it will be skipping out on a Switch edition this year. "WWE 2K19 will not be available on Nintendo Switch," a 2K spokesperson said. "2K is focused on making the best possible experience for WWE 2K fans and will continue evaluating all opportunities to deliver the franchise across additional platforms."

WWE 2K19 will be available on October 9, but the Deluxe "Woo" Edition lets you play four days early. 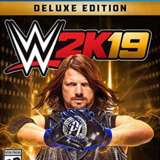