Activision and Disney Interactive collaborating on arcade-style side-scroller for Nintendo platforms; Wii version to feature co-op with Ralph and Felix.

Disney's upcoming video-game-themed animated feature film Wreck-It Ralph will be spun into a "classic, arcade-style side-scroller," much like the fictional game it is based on, publisher Activision announced today. In partnership with Disney Interactive, the Call of Duty company will release a Wreck-It Ralph game this fall alongside the film for the Wii, DS, and 3DS.

The game is a "story extension" to the feature film, picking up where the movie leaves off. Wreck-It Ralph is being billed as a game that will "inspire a whole new generation of young gamers" and has players fighting off a Cy-Bug invasion. Throughout the game, players will use Ralph's strength to defeat the enemies, while also taking on the role of Fix-It Felix to repair the damage.

The Wii version of Wreck-It Ralph features co-op, where two players can work together and switch between Ralph and Felix to solve the game's puzzles and collect "Hero Medals."

As for the film, Wreck-It Ralph follows the titular Ralph, a villain in a retro arcade game. After decades of coming out on the losing end, Ralph decides he's fed up with being hated for doing his job and quits. He takes off to explore other gameworlds, coming across a variety of gaming icons along the way.

The film was directed by Rich Moore (The Simpsons, Futurama) and stars John C. Reilly (Step Brothers) as Ralph, Sarah Silverman (Jesus is Magic), Jane Lynch (Glee), and Jack McBrayer (30 Rock). It will hit theaters this November in Real 3D. 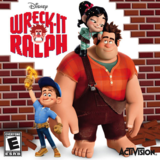