Team 17's newest game in the Worms series will have you building structures strategically in addition to blowing up your wormy foes.

Team 17's wacky battlin' annelids are back in yet another new strategy game, Worms Forts: Under Siege! for the PS2, Xbox, and PC. We gave the game a couple of turns at Acclaim's E3 display and found that, although Under Siege! makes some additions to the long-standing Worms strategy formula, the series' trademark endearing humor is certainly intact.

The big new change to Worms Forts is related to the "forts" part (and the "!" part, if you like). Essentially, you'll have to construct a network of buildings outward from an initial stronghold, and these buildings will determine both where you can attack from and what you can attack with. There are different kinds of buildings that you can build based on location and resources, and once you've got a building planted and you're ready to make your worm attack from it, you'll pop up a window that shows the available weaponry for that building.

There's a sizable strategic element to Worms Forts' building system, because the chain of buildings extending from your stronghold acts as a sort of supply line. If you destroy a particular building in a chain, any buildings beyond it that aren't otherwise linked to your stronghold will become inoperable. This mechanic will make sure tactically skilled players are mindful of the way they build their buildings--a straight line of buildings is a very bad idea, for instance, but a diamondlike configuration will make sure you can still use the maximum number of structures should you lose one of your buildings.

The Worms series is known for its crazy and humorous weaponry, and it looks like Forts will be no slouch in this department. In addition to the usual assortment of cannons and catapults, we saw a giant '50s sci-fi-style laser gun that fired a sizzling red beam; the monkey troupe, which fired a volley of incendiary simians; and Armageddon, which simply brought a hail of hellfire down upon the target. We even saw a big gun that may or may not have been called the bishop launcher. We're going to call it that anyway, because that's exactly what the weapon did--it launched a bishop (complete with hat) at its target with considerably destructive results.

Worms Forts will support up to eight players on one console, since each player will take his or her turn and then pass the controller on to the next player. The game will also be playable online with Xbox Live or the PC version. You can expect to see a lot of graphical variety too, since the backdrops and buildings span four wacky historical settings--oriental, Egyptian, Greek, and medieval motifs will be available. Worms Forts Under Siege! will hit stores in the fall, and look for more coverage on the game soon. 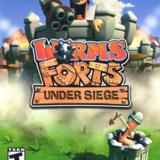