Blowing things up is fun.

Blowing things up is fun. Whether you're a long-term video gaming veteran who's looking to perfect the rocket jump in Quake or a newbie just trying to figure out how to get your tanks to move in Command and Conquer, the basic impulse to destroy something with a large weapon is what subconsciously drives your actions. Little by little, the really violent games are including little other than mayhem and destruction, offering up just enough storyline and plot development to fool you into thinking that there's some point in shooting a demon at point-blank range with a rocket launcher. It's all kind of silly if you think about it. If people want to kill with reckless abandon, why trouble them with any reasoning at all. Give 'em a pile of weapons and let 'em go at it. That's just what Team 17 is doing with its new title Worms 2. Armed with the most staggeringly destructive weapons imaginable, you can take on the computer or other players in an ultrasimple explosion fest that's addictive in the extreme.

Worms 2 plays, for the most part, exactly like the original. You control a team of small worms on one of several two-dimensional maps. On each turn you are allowed to move one of your worms and fire one of your weapons. The last team with any worms left is the winner. It's that simple. The real joy in the game is in the effects. Weapons not only damage opponents but also destroy the land around their area of effect. Often the best way to get rid of an enemy is not to shoot him directly but to destroy the ground underneath him, sending him into the water that is always present at the bottom of the screen. Just for the record, worms can't swim. Just as pleasing is the sheer size of the weapons catalog, which boasts such close-combat weapons as the pistol (for those who want to finish off an opponent with style), the shove (for that enemy who's standing just a little bit too close to the edge), and the dragon punch (complete with a tiny cry of "Shoryuken"). For those who are looking for more spectacular methods of worm disposal, there's the grenade (which requires a great deal of skill to throw it at the correct angle and with proper timing), the holy hand grenade (which levels everything that's even close to where it lands), and dynamite (drop it next to an enemy and then run away FAST!!). By the end of the game, the playing field looks like a large piece of Swiss cheese, and the remaining worms are usually hanging on by a thread and low on ammunition. This is where the game is at its best, as a few limping survivors pick each other off with low-powered weapons.

Worms 2 has a lot going for it. It's easy to learn, it's easy to play, and it's very addictive. Even at its current beta stage, several members of our office are fighting over who gets to play with the disc on a given day. In addition to the fantastic cartoon graphics and brilliant voice effects (each team of worms has its own accent - you can select anything from American to Angry Scotsman) the game also boasts one of the simplest and most entertaining multiplayer setups around. Although I've learned to never say anything's guaranteed to be a great game before it's final (it's amazing how much game companies can screw up a title between beta and release) Worms 2 comes closer to deserving it than anything has in years. 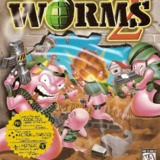