Battalion 1944, the crowdfunded World War II FPS that is being published by Square Enix, will finally hit Steam Early Access on February 1, its developers have announced. At that time, anyone can buy the game for $15/£12/€15, though it still won't be a finished game then.

Ahead of that launch, there will be a Battalion 1944 closed beta taking place on PC on January 20 and 21. You can sign up for a chance to play here on the game's website. Previous betas blocked people from sharing their gameplay but for this beta, people are free to publicly publish gameplay to social channels for all to see.

Battalion 1944 was successfully funded on Kickstarter in 2016, raising more than $450,000 from 10,000 backers. That was well above the studio's target ($142,000), and the extra funding allows the studio to make a game that developer Bulkhead Interactive claims will "challenge the biggest AAA shooters in the industry."

Battalion 1944 will be published through Square Enix's Collective division that works with independent studios to help them with things like marketing services and testing. A major pillar of the Square Enix Collective is that studios retain creative control and all brand rights. 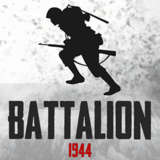