When amateur card player Chris Moneymaker won the 2003 World Series of Poker, which was covered extensively by ESPN, every Joe Blow and Jane Doe had dollar signs in his or her eyes. The poker explosion made its biggest leap online, where some college freshmen raked in six figures rather than write papers for their Psychology 101 classes.

The worlds of television (Tilt), film (Lucky You), and books (countless "How to" tomes) have all capitalized on the craze, so logically gaming companies followed suit. Publishers scrambled to acquire the big licenses, with names like World Poker Tour and players such as Howard Lederer and Daniel Negreanu all getting in on the action.

Activision, one of the bigger third-party players, hooked what could be the biggest fish of them all: The World Series of Poker, in conjunction with Harrah's Entertainment. The first batch of games based on that license, the Xbox and PlayStation 2 versions, shuffled into stores today.

By striking the deal with Harrah's, Activision got sole rights to set their game in the Rio Casino, the site of this year's World Series of Poker. Gamers will be able to play Texas hold 'em, seven card stud, Omaha, and other poker variants, as well as customize their players with faces, duds, and chatty table talk. Like a real-life high roller, winners will be able to spruce up their wardrobes and can get the whale treatment by getting invited to luxurious suites. 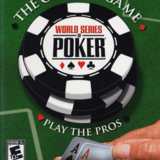