After a shaky start on the Dreamcast two years ago, Sega's World Series Baseball franchise looks like it may be finding its stride. A console classic since the days of the Genesis, the series has seen installments appear on the Genesis, Game Gear, 32X, Saturn, and Dreamcast. Unfortunately, the series stumbled badly in its first Dreamcast outing. Initially developed as an arcade title by Sega developer Wow Entertainment, the game lacked much of the previous entries' appeal. Fortunately, Sega and Visual Concepts stepped in and handed the reigns of the project to California-based developer Blue Shift, which has been working to restore the series to its former glory. The latest installment, which will be called World Series Baseball and will be exclusive to the Xbox, is taking several promising steps toward a full recovery for the series.

This year's installment in the series will offer what's now the standard assortment of modes in a Sega Sports game: quick start, exhibition, playoffs, season, franchise, and home run derby. Quick start will throw you into a game using the game's current settings and two randomly selected teams. Exhibition will let you pick any two teams and play in any of the 30 Major League ballparks. Playoffs will let you focus on just making it to the fall classic without the worrying about playing through a full season. Season lets you play through a season that you can customize by selecting the number of games, creating a fantasy draft, and setting the game's difficulty. Franchise mode puts you in the role of a general manager and charges you with guiding your team to victory. You'll have to contend with the challenges of players retiring, signing free agents, and keeping an eye out for up-and-coming talent. Home run derby will let you compete with the AL and NL's top hitters in a competition for up to eight players in the ballpark of your choice. You'll get a set amount of pitches (five, 10, or 20) that you'll have to try to hit for credit.

Fans who enjoy customizing their experience will have plenty to sink their teeth into thanks to World Series Baseball's many options. You'll be able to tweak the game's presentation by choosing one of three settings (mute, standard, and TV broadcast) or a custom setting. The various choices will adjust the audio level of ambient elements such as the PA announcer and the crowd. You'll also be able to adjust the game difficulty, the time of day, the length of the game, and the uniform style (you'll be able to choose between standard and classic unis), and you'll be able to turn the designated hitter, errors, wind, pitcher fatigue, the strike zone, and the pitching cursor on and off. You'll also be able to toggle the size of the batting cursor, adjust pitch speed, and turn variable pitching on and off. Finally, you'll be able to create your own original character using the game's create-a-player feature. It will be possible to create more than 20 custom players in the game. You'll be able to tweak every aspect of your player character and import him into the game's season and franchise modes.

While the various modes and customization options are all well and good, World Series Baseball wouldn't be much of a game if it didn't deliver in the gameplay department. Developer Blue Shift has built on its previous work on the game and continued to refine the experience. While World Series Baseball still doesn't offer the polished experience of the sublime Saturn games, it's getting there, and it manages to toss in some nice tweaks to keep the gameplay balanced. You'll be able to trigger a cutoff man to intercept balls in case of a crisis on the field that requires immediate attention. The control layout is intuitive and feels right.

The game's intuitive control is a major component of one of World Series Baseball's best attributes--its immersiveness. Thanks to the game's support of Dolby 5.1, its sound is truly awesome. The excellent sound separation, coupled with the richly layered ambient sounds, adds a lot to the game's feel. Crowd noise, wind, and the announcers all combine to give World Series Baseball some of the best in-game sound heard on the Xbox.

Graphically, the game is a stunner. Blue Shift's opportunity to develop for a single platform has resulted in amazingly detailed and animated graphics. The game's generous polygon budget has allowed the team to create robust characters with a ton of fine detail and stadiums that feature the same loving attention. The animation is slick, thanks to hefty use of motion-capture data. World Series Baseball is shaping up to be the best entry in the series since its glory days and a great addition to the Xbox's sports lineup. World Series Baseball ships next week for the Xbox. Sports fans will surely want to check it out. 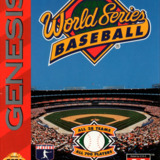