Crave brings its popular console game of poker to the PSP with some new online features in tow.

Crave's popular World Championship Poker series is making its way to the PSP, and we were able to take a look at the latest version of the game recently. You'll have 14 kinds of poker to choose from, including Omaha, pineapple, and the ever-popular Texas hold 'em. The game will also sport six types of poker exclusive to the PSP, such as high and low Chicago, and these are available online through the game's infrastructure mode. Speaking of online play, you'll even be able to play against owners of the PS2 version of the game through Crave's matchmaking service.

The main component in World Championship Poker 2 is the career mode, which lets you create a character and then starts you off in your mom's basement. You'll earn cash from playing in increasingly high-stakes games, and as you move up the ladder you'll move out of the basement and into a series of increasingly nicer pads. When you've got enough cash, you can hit the pawn shop to buy stuff you can decorate your swinging penthouse with. But if you lose too many times, you might have to hock that same gear at the shop to make enough cash to keep entering into new games.

There are several other features available in World Championship Poker 2. For one, there's a bluffing minigame that pops up whenever you've got an appropriate hand in a game; you'll have to control a wheel with precision to keep your game face on. You can also rack up role-playing-game-style skill points as you play, which you can apply to seven different categories to improve your game. Finally, a full set of tutorials is included that will teach even a total beginner how to play the game of poker.

If you need to take poker with you anywhere and a simple deck of cards won't cut it, World Championship Poker 2 may be just what the doctor ordered. It seems like the game has just about all the poker types and game options that a discerning player could want. We'll bring you the final word when the game ships in late November. 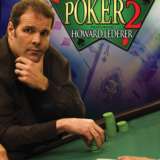