Casual gamemaker Zynga already boasts a Facebook game stable of big-time titles like Mafia Wars and Farmville. However, now the San Francisco-based studio is expanding its vocabulary by bringing one of its mobile games--Words with Friends--to the social networking behemoth.

Words with Friends for Facebook does not yet have a firm launch date, but when it does arrive, it will support cross-platform play. For example, a player on an iOS or Android device can participate in a game against a player using the Facebook application.

As for the game, Words with Friends is a turn-based Scrabble clone that allows users to take part in up to 20 games simultaneously. 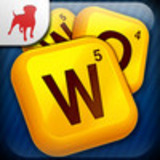