WizKids has been helping elevate your Dungeons & Dragons games with its miniatures and WarLock tile sets, which allow users to create custom dungeons and scenes that you can use in you D&D sessions. Now, WizKids has new expansions, a new set, and a slew of accessory kits to help you craft the perfect encounter.

Since the massive boom in popularity, due to the rollout of 5th Edition, WizKids has pumped out some great miniatures--like these horrifying Boneyard minis--but where the company is truly shining is with WarLock, its tile set which can be used for your D&D games.

Five new expansions were released recently, along with multiple accessory sets to bring your scenes to life, and WizKids provided GameSpot with a few to check out. Four of these are expansions to previously existing tile sets to give your dungeons or buildings a bit more dimension. One is a brand-new set that will take your games to the city streets. 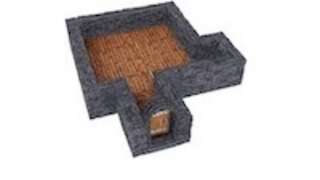 The new Town Square: Town & Village set contains 74 tiles and numerous accessories to create an outdoor area. Much like other WarLock sets, everything is on a grid system, which you can use WizKids miniatures on. Check out some images of the set below.

Quick note: For the purposes of setting up these scenes, I used the half-height walls over the full height walls. I wanted everything to look consistent while working with these new expansion sets.

The Town & Village set is highly-detailed, and the paint job on the tiles is fantastic. I didn't use everything that was available in the set, as I wanted to create a cityscape that worked with a building--more on that later. The set comes with lampposts, accents, and sewer grates to give your scenes a little bit more realism. Obviously, you don't have to create one road that has a 90 degree turn in it though. There are a plethora of options when building out your set.

Additionally, you can add Marketplace and Merchants accessory sets to your scene to give your players something to navigate around or places to shop outdoors. Check out some of the images below on the Town & Village set for the full effect.

Much like the Town & Village set up, not everything from both accessory sets was used in putting these together. You can have your heroes--or villains--go grab some fruit from a merchant or have one of them at the whims of an executioner, probably because laws were broken, which happens a lot.

For those looking to take things indoors, there are two new expansions for your Town & Village sets: Angles and Curves. These expansions give your scenes some more definition. Curves can bring grandeur to entryways or help add an interesting aesthetic to a room, and the same can be said for angles. Check out some of the photos from the set below.

You can turn that inn room into something a bit more spectacular with a nice curve or two. But it also helps if you add in the Tavern accessory kit, which comes with some beds, a bar, a bartender, a fireplace, and more. There is also a Kitchen accessory kit, just in case you want to add some flavor to your scenes.

Much like the Town & Village sets, the Dungeon Tiles also got the angles and curves treatment. You can check out some images below, which gives you a better idea of how these new expansions can add more to your gameplay.

Sometimes you make dungeons too big for your photo box. Luckily, I made a dungeon that can be split up into sections. Diving in, you can see in the main entry room that there are divider walls for both straight and angled pieces--curved as well, which you can see in later pictures.

Of course, we added in some of the Boneyard minis to certain places along with some other minis I have in my collection. However, there is also a new Torture Chamber accessory kit which add a lot of flavor to your rooms, or iron maidens to throw your foes into. Everything from the accessories to tiles is incredibly detailed and painted. And there is a lot to choose from to add to your collection.

Here is where we get to probably the biggest roadblock for some people when it comes to the WarLock tile sets: the price. WarLock sets are expensive; however, you're paying for a high-quality product. The Town Square set costs $130, which can be a tough pill to swallow, but it does add a lot to each of your scenes.

The curves and angle expansions cost $80 each and you can choose between dungeon or village tiles. The basic half-height WarLock tile sets will cost $100--with full-height sets coming at $130. Then there are the accessory sets. They all run $50 each.

You can check all of these out on the WizKids store online, but there are also links below to Amazon to the products discussed here, some of which are a little bit cheaper.

Let's talk about the elephant in the room first: the cost. WarLock tiles are pricey. It costs more than printing out your own tiles using a 3D printer--if you're someone who already owns and knows how to operate one. It's still a little costly to create them on your own, keep in mind. However, what sets WarLock apart from making them at home yourself is the paint job and finishing of the products, which is consistent and far and above what most people can do on their own.

And while tile sets can be a solo purchase, in my personal experiences playing D&D, purchases like this are a shared experience between the people you play with. So while the price can seem a little steep, it's not something you would have to purchase on your own. (How many people playing out there share Player's Handbooks? I'm guessing the majority of people reading this.)

Pricing is the only downside to the WarLock tile sets. It's exceptionally easy to build your own dungeon. The pieces just snap together using WarLock clips, and there's a handy chart that shows you the best way to do it inside each box. And if you are one of those people who 3D printed their own tiles, there are WarLock clips that can connect personalized tiles to the WarLock tiles, which was actually a huge surprise.

While I was a little skeptical about the angles and curves expansions, they really add another dimension to your dungeons and village buildings. I found using these expansions for the dungeons to be much more fulfilling, as using them for a tavern or inn I created looked aesthetically great but didn't excite me as much as using them in a dungeon. While the full-height walls add a little more realism to the game, the angles and curves only come in half-height versions. And after creating buildings and dungeons for hours, I found the half-height walls to be more favorable in general, as it was a little easier to put in scene dressings.

As for the Town Square, it isn't a set you necessarily need, but helps create connectivity between your buildings, instead of placing the buildings on a dry-erase grid board--something I've sworn by in my 20+ years of playing D&D. Adding the accessory kits helps complete a whole scene, but what I loved about the Town Square set was the simplicity of it. You get sewer grates, which can take you to the sewers underneath your town. There are lamp posts as well, but overall, the accessories for the Town Square set alone were very underwhelming. There just isn't a lot. Regardless, it's an exciting addition to the WarLock collection, and who doesn't want to have a giant battle against their mortal enemies--probably a bunch of Kobolds--in the middle of a town on highly-detailed tiles?

As for all the set dressings, the WarLock accessory kits add a whole new dimension to your dungeons and buildings. Once again, they are expensive--coming in around $50 a piece--but they're worth the price of admission if your D&D group wants to invest in them. Empty rooms turn into the local watering hole, an inn, or a horrific torture chamber with iron maidens and cages you can lock your minis in. And like all WarLock kits, the attention to detail is wild. These are some of the best-looking minis and accessories available now--unless you're a master painter and do it yourself.

WizKids' WarLock tile sets are impressive. But those highly-detailed and painted tiles and accessories come at a price, one that is worth it if you want to create elaborate scenes for your D&D games. That's the only downside to everything in these sets. It costs quite a bit, but it's worth it. Everything about the WarLock sets and accessories is something long time D&D players would love to add to their arsenal in order to create a fulfilling gaming session.

Back To Top
Load Comments (1)