We get a hands-on look at Atlus' upcoming RPG.

Sirtech's Wizardry series can definitely be counted among the seminal computer RPG series of the 20th century. It's seen a large number of installments on the PC platform, and some versions of it were even ported to the NES in the early '90s. However, its popularity on console systems was never as strong here as it was in Japan. Its latest incarnation comes courtesy of Japanese developer Racdym, and, in truth, it's more of a long homage to the series than a genuine installment.

Wizardry games have always been strongly built around pen-and-paper fantasy RPG conventions. The characters you play as are based on familiar archetypes, as are the items you use and the monsters you fight. The idea of customization also plays a major role, much more than typical console RPGs allow for. In Wizardry: The Forsaken Land, you can build your main character from the ground up--you can select its race, class, gender, and alignment, as well as distribute points among its attributes. So far as race goes, you have your typical D&D assortment: elves, dwarves, humans, and halflings (or hobbits, as it were). Each race has classes for which it is ideally suited, though you don't have to heed these if you so choose. The classes are also cast from the D&D mold. You have fighters, mages, thieves, and priests at the outset, though as you progress, variations on these become available--classes such as ninjas and bishops. You can also change your class at your leisure and eventually come to acquire a healthy portfolio of professions. Clearly, the game's system is pretty in-depth. It might be a little difficult for fans of console RPGs to get into Wizardry, though, given its notable lack of frills.

The game's story, at any rate, is in keeping with the sorts of things that RPG fans have come to expect. One day, fire begins to rain from the sky, wholly razing the prosperous land of Ruhan. After the Armageddon, an eternal winter ensues, seriously compromising the livelihood of its people. With disaster and famine come monsters, as logic would dictate, and after them (and their treasures) come adventurers. Next thing the world knows, Ruhan is a haven for adventurers seeking to stake their fortunes. The city even has a neighboring labyrinth, which, incidentally, is where you'll spend the bulk of your time in Wizardry. Your character is a new arrival at the game's outset, and you're greeted by a grizzled (but great) swordsman who bears some rather interesting news. As it happens, you fit the description of the hero destined to return Luhan to its former glory. Skeptical as he may be, the warrior realizes he's not one to question the mandate of fate and sets you on your path anyway. You're to assemble a group of similarly valiant heroes, he tells you, and delve into the Ruhan labyrinth to rid the world of the horror that dwells in its depths. You're on it immediately.

The first thing you'll notice about Wizardry is the unorthodox manner in which you traverse its world. Ruhan's civilized area, essentially, is a large 3D map, which you view from a series of fixed angles. More a set of 3D structures than a cohesive map, you scroll through the area's locations by means of the D-pad--think of it as a giant 3D menu. Scrolling through the different structures will cause the camera to move to its location, and selecting it will simulate your party's moving toward it in a sort of first-person perspective, audible footfalls and all. Once in a structure, you're treated to hand-painted scenes of the hustle and bustle therein. They're certainly nice looking, rendered with a sort of alcohol-marker/watercolor effect, though they're mostly static, aside from an occasional image swap here and there. When you meet characters, their hand-drawn, paper-doll portraits are superimposed on the scenery and their dialogue superimposed on themselves. The effect is quite lo-fi, but it's certainly endearing.

Once you get yourself to the labyrinth, the game's heritage really starts to show. You'll traverse the maze from a first-person perspective, much like you did in the original Phantasy Star game. There's an onscreen map that tracks your progress, though, so you'll need not waste your graph paper. In any event, you'll be able to peek around the environments with the right analog stick, as well as run through them by holding the X button while moving. This serves the purpose of allowing you to bust through walls when the need arises. As in every role-playing game, monsters dwell in the dungeon, and you'll more often than not see them before you get into fights with them. They typically take on abstracted 3D forms as they lurk the dungeons, the colors of which seem to indicate whether they've spotted you or not; whatever the case, though, you'll notice that red ones will charge at you, while golden ones will seem generally unaware.

Once a fight starts, you're taken into a 3D battlefield of sorts, on which rest fully modeled representations of the creatures you're fighting. The perspective in these is first-person. You'll see your party's status information, and, when they execute attacks, you'll see their weapons cleaving, cutting, or what have you into the creatures' bodies. It's all along the lines of the Dragon Quest games if you're looking for context. Battles are a turn-based affair, and you choose every member of your party's attacks prior to the start of each round. The most interesting thing about Wizardry's battles is its allied-attack system. As in the Chrono games, two or more of your party members execute certain attacks. The particulars depend mostly on their positions within your ranks--you can set members in either the front or rear rows. Certain ones are geared toward defense (execute X attack if a Y party member is assaulted), while others are intended for offense. In either case, they're generally more effective and damaging than individual attacks, though they come with the obvious strategic ramifications.

Your party's ability to learn and execute these attacks is wholly dependent on how much the individual members trust you, the leader. Depending on your actions throughout the game, certain characters will lose or gain respect for you. Good-aligned characters will generally like you if you refrain from attacking friendly creatures, heal wounded members, and the like. Evil characters will favor the opposite sort of behavior. You'll be given many opportunities to tilt this either way throughout the course of the game's story, so players wanting to take either path should be fairly well provided for.

In any event, the build we've been playing seems mostly complete, aside from some random interface funk that needs attending to. Wizardry: The Forsaken Land seems like an altogether unlikely release for the US market, but, in any event, it will be available next month. Check back then for a full review. 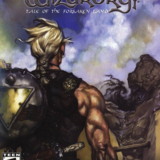