A pair of Star Wars mobile games are no longer available for download, and neither players nor the developer of at least one of the games were told in advance.

Assault Team was developed by an internal Disney Mobile studio. Tiny Death Star, on the other hand, was created by independent developer NimbleBit, best known for Tiny Tower. GameSpot spoke with NimbleBit co-founder Ian Marsh by email about the sudden removal.

"The first clue we received was a tweet directed at us yesterday from a player asking why the game wasn't available on the App Store," Marsh said.

As for whether it had gotten any indication that such a move could be coming, he said, "We never received any timeline but the layoffs which affected the Tiny Death Star development team along with the rest of Disney Interactive did make us unsure about the game's future."

According to Marsh, the game "seems to still be playable for now, but we have no idea how long that will remain the case."

NimbleBit--a four-person studio--was still making money from the game, and Marsh said the game's removal "will certainly be a hit to our business." But there's more on the company's mind than just the loss of money from the game: "[M]ore importantly [this] will likely tarnish the reputation we've built as a developer who values their players over revenue."

As for whether this would impact the company's likelihood to work with a company in a similar fashion in the future, Marsh said, "We're always open to ideas but historically things have worked out best just working on our own."

Disney declined to comment on the decision to remove the two games. It also wouldn't address how long they may remain fully playable (with in-app purchases enabled) for or if anything will be done for players who have spent money on these games.

We have, however, learned the purpose of the removals is to focus on newer mobile Star Wars games, including the Clash of Clans-esque Star Wars: Commander and presumably the upcoming Star Wars: Galactic Defense. 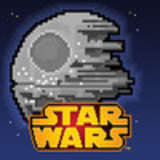