With Co-op And Weapon-Crafting, Mothergunship Improves On Its Predecessor In Every Way I Hoped

The primary rule when building a gun: the barrels have to face forward.

Mothergunship is the follow-up to Tower of Guns, the 2014 PC roguelike shooter that later released on Xbox One and PS4 (where it debuted as a PlayStation Plus game). The new game maintains the same basic style of gameplay but meaningfully addresses its predecessor's shortcomings in a number of welcome ways.

Like Tower of Guns, Mothergunship is a first-person shooter that approximates a bullet-hell game. You'll be faced with huge crowds of enemies--and a positively ridiculous number of bullets. (This is true to the point of becoming comical, as is the case when you face off against the Turret Wall, a huge boss made up of dozens of turrets that each fire multiple shots.) It's a proposition which, even after hours of playing Tower of Guns, remains a delightful challenge in first-person.

For as much as I enjoyed the Tower of Guns, it was far from perfect. That shouldn't come as a surprise, given that developer Terrible Posture's Joe Mirabello describes it as a "very one-person experiment kind of game." After it became more successful than he anticipated and he established a good relationship with Grip Digital, which handled the console ports, the two decided to seize the opportunity to address fans' complaints.

"Basically, all of the things that people really didn't like about Tower of Guns, I was paying attention," he told GameSpot at PAX East. "This is like, okay, what can we take that worked well, how can we make it better, what can we take from feedback to Tower of Guns, what kind of things would make the entire game a more fun experience, and basically how can we make as good of a game as we can out of it?"

As novel as the concept of Tower of Guns was, its actual movement and shooting left something to be desired. My enjoyment with that game stemmed more from the novelty of its first-person bullet-hell style and its secret-laden levels more than the actual gunplay and movement.

"There were some lessons that we learned, like the idea of this bullet-hell first-person shooter gameplay, people seemed to really respond to that," Mirabello said. "Or the idea that you could get like 60 jumps and jump around like crazy and you're airborne half the time, you had tons and tons of firepower on you; people really seemed to respond to that. So we really wanted to hone in on that and refine it."

And that's precisely what Mothergunship does. A quick look at gameplay suggested that my issues with Tower of Gun's less-than-smooth gameplay had been resolved, a notion that was confirmed as soon as I got my hands on the keyboard and mouse. Mothergunship feels much more fluid than its predecessor, and the guns feel much better.

That's fortunate, because the lineup of weapons is a real highlight here. Mothergunship features an impressive weapon-crafting system. The brief time I spent customizing a gun revealed an intuitive process for installing parts that you discover while playing. The possibilities are as ridiculous as you'd expect for a game where you might be faced with hundreds of incoming bullets: example weapons include a 12-barrel gun that fires homing rockets, a lightning shotgun, and one with a fish tank on top.

"You can basically attach anything to the gun in any place," Mirabello explained. "The only limits are that the barrels need to face forward and the pieces need to physically fit."

Crafting itself doesn't cost any money, but there are resource considerations to take into account with your design. Adding on parts increases the amount of ammo--which takes the form of a regenerating energy meter--that the gun requires to fire. So while you're free to construct your own BFG equivalent, you'll need to do so knowing that it may leave you unable to fire again for a short while. "It will be a cost-benefit analysis of whether or not it's wise to put it on your gun because it may cost more to fire," Mirabello said.

The ability to dual-wield a second gun opens the door to have two different types of weapons that complement one another. In the version of the game that was playable at PAX East, a single energy meter was used to power both of your weapons. The development team suspected it might need to offer each weapon its own energy bar, and seeing people play the game at the event confirmed as much, so that change will be made for the final game.

"That way you can build a crazy gun in your right hand and a much more lightweight gun to fire while the other one's recharging in your other hand," Mirabello said.

Levels need to be completed in a single life, and death sends you back to a base that Mirabello compares to that of a game like Darkest Dungeon. Whereas Tower of Guns hewed closer to being a proper roguelike, only letting you permanently unlock different weapons you could choose from to start your run, Mothergunship provides more persistence. From your headquarters, Mirabello says, "You'll be able to upgrade your player's abilities, increase your basic stats, as well as craft crazy guns, trade with your friends, or choose what to do next."

What's next doesn't have to be another mission of the story, where you're working toward destroying the eponymous Mothergunship. Aside from having more variety in the types of weapons at your disposal, you'll also have more ways to play. There's an endless mode and daily seeds to provide you with a different, identical challenge that all players can face that day.

Most exciting of all is the option to play the game cooperatively, although I wasn't able to try this for myself. Mirabello didn't offer much insight into how Mothergunship's difficulty compensates for playing with more than one player except to say it features a "very dynamic difficulty" and that players can "affect whether or not [it] goes up or down in quite a few ways."

It's not often that a sequel comes along that so thoroughly checks off every item on your personal wishlist for it. With Mothergunship, Terrible Posture looks to be taking a fantastic concept and fleshing it out in all the right ways. 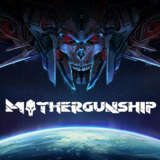