The Wipeout spiritual successor comes to Xbox One and Xbox Series X/S.

Pacer is a futuristic, high-speed racing game that'll be immediately familiar to fans of the classic 90's Wipeout series. After launching on PS4 and PC late last year, the game is now available to play on Xbox One and Xbox Series X/S.

"The year is 2075. You're a fresh pilot on the starting grid, ready to take on any and all challengers to make a name for yourself and become the Pacer world champion," the official Xbox description reads. Normally priced at $40, Pacer is on sale at launch for $32 on the Xbox Store.

Pacer has been around in one form or another for a while now, first appearing as Formula Fusion in a 2015 Kickstarter campaign. The game released in early access that same year, before rebranding to Pacer in 2019 and finally seeing its full release in October 2020.

Always intended as a spiritual successor to the Wipeout series, Pacer studio R8 games includes some Wipeout veterans among its ranks, including R8's founder Andrew Walker. The gameplay has players customizing their anti-gravity racers, collecting mods, weapons, and defenses, and of course racing to earn credits to pay for it all. Pacer features 8 different game modes, 4 speed classes, and 14 race maps with a broad array of map variants available.

Pacer is now available on PS4, Xbox One, Xbox Series X/S, and PC via Steam. 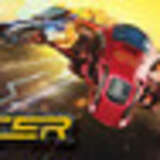