Is this leisurely flight game the next best thing to a Pilotwings game for the Wii? We get some hands-on time to find out.

While Nintendo fans patiently await the return of the Pilotwings franchise, Konami might just have a suitable surrogate in the form of Wing Island, a leisurely flying game for the Wii. The game is already out in Japan, but it's coming to North America later this year. We recently spent some time with the game to see how it puts the Wii Remote and Nunchuk to use.

Wing Island is about a young pilot named Junior who must take to the skies and do odd jobs around Shell Island to save the family business. There are more than 20 missions in all, requiring you to do things like dust crops, fight fires, and drop bombs to remove rock formations. You don't have to fly alone, though; you're accompanied by four other planes that fly in formation with you to help you complete your tasks.

The controls in Wing Island are easy to pick up. You hold the Wii Remote pointed at the screen and tilt it forward and backward to fly up or down. Tilting the remote will make you turn in either direction, and thrusting the remote forward or pulling it back sharply will make you speed up and slow down. To execute a quick turn, which turns you completely around in the opposite direction, you can perform a wide swinging gesture with the remote. Using the analog stick on the Nunchuk attachment, you can adjust the camera, which is especially useful when you need to aim at the ground below to perform tasks such as dropping bombs.

An important aspect of the game is flying in formation, and there are several formations to choose from. You begin in a flying-V formation, which gives you average acceleration and turning ability. By holding the A button on the Wii Remote and thrusting it away from you, you can switch to a line formation, which is fast but not very maneuverable. To switch to the cross formation, you have to hold the A button and swing the Wii Remote left or right. The cross formation is the best formation for turning and maneuverability, but it doesn't allow for much speed.

We found the controls to be easy to use, as long as you give yourself plenty of room to turn. Sharp movements don't translate very well in the game, so you have to use more gentle movements to get the best response from your aircraft. We had a good time just taking a relaxing flight around the island, ducking beneath rock archways and swooping in low over the water. The only plane we had the opportunity to pilot was a basic biplane, but there are more planes promised that can be purchased with money you earn by completing jobs. We played a mission that required us to drop bombs to destroy stone archways, which wasn't especially challenging but was fun nonetheless.

The game is bright and colorful, and it looks quite good. It also ran nice and smoothly in our experience, and the draw distance was adequate enough to provide a good view of distant objects and structures. The planes themselves were simple red biplanes without much detail or distinctive characteristics. The island was fairly small, with rocky crags and small mountains jutting into the sky. There were also several smaller islands off the coast of the main island. We had fun exploring the terrain, which offered plenty of variety.

In addition to the single-player missions, there are a number of two-player minigames. We didn't get any details about what exactly these minigames involve, but it is somewhat disappointing that they only support two players rather than a full four. All in all though, Wing Island seems like it could offer a fun, family-friendly flying experience for people of all ages. Be sure to check the gamespace for further updates before this game is released this spring. 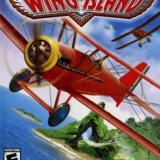