We take a look at the Rayman, Beyond Good & Evil designer's ambitious new game. 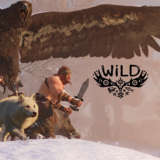 "Not to go into complex philosophy, but [Wild] is really about what is dangerous and what isn’t, between man and nature," Michel Ancel explains at a behind-closed-doors presentation during Paris Games Week.

"Understanding the world is important. You have a friendly bear, but at the start of the game, you’re being killed by bears. You think they’re the big enemy, but you must understand how they behave … Understanding is how you change those dangerous things into interesting [tools]."

This statement came hot on the heels of Ancel showing us how bears do a little butt-slide if you run down the side of a mountain. After describing such a manoeuvre, Ancel flashed a cheeky grin and said, "People are going to the highest mountains and doing the sliding with the back of the bear."

The last time I was part of a conversation about racing animals, the other person went on to eat the entire contents of my biscuit cupboard. Ancel is definitely high, but he’s high on freedom, man.

In Wild, players are cast as a shaman and venture forth into an uncharted wilderness. To conquer Mother Nature (surely the true end-level boss of our age), they must first live with her, and understand her ways. Why are we trying to conquer her? That wasn’t made totally clear, but we think it involved finding the cure for a poison.

Why, evidently, isn’t given as much importance as how in Wild. This is not a game that will tell you what to do and when to do it, Ancel says. Instead it leaves you to discover the world and learn the dynamics that govern life within it; choose your own objectives, find the best tools to achieve them.

Ancel continues: "The world is just huge, you can go wherever you want, there's no fakery … The project is very vast. We wanted freedom. In most games now you have missions that are very rigid. We wanted something where you had choices."

Those tools are animals, by the way, and you totally possess them. Wild's world is populated with many collective nouns. Broods of snakes. Prides of lions. Murders of crows. Some of these will wander around during the day, while others only appear at night. One species may prefer to stick to snowy mountains, and the next may never leave the depths of the sea.

There is a complete and functional ecosystem, Ancel claims, along with a food-chain for the player to manipulate. This, we’re led to believe, is the core of the gameplay experience: solving problems by understanding and using what's around you.

In our demo, the task at hand was reaching one of the game’s many landmarks. These can be accessed in any order you choose, but are usually protected by something dangerous. In Wild, however, danger is relative, and an angry bear is relatively powerful.

Our shaman enters a meditative state, possesses a bear, and starts butt-sliding his way towards the landmark. En route, we get a look at the game's real-time day and night cycle. On top of creating some stunning moments where the character is silhouetted in the sky by moonlight, night-time will shift the dynamic of the game by giving predatory animals the upper-hand.

Players can choose to either set up camp and wait out any potential dangers, or see if they can possess an animal that thrives in the darkness.

"There are large trees which you can build your shelter on," Ancel explains. "Sometimes it’s better to sleep in a safe place. You have to balance things if you’re going to carry on with your journey, or wait for the night to pass. It’s like games such as Don’t Starve, where there is a different rhythm and stress at night."

Night is no problem for a bear, obviously, so we soldier on. As we approach our landmark, the distant beating of drums and tribal chanting serves as a sign that something a little lower-profile might be necessary, so we quickly jump into a wascally wabbit nearby.

A group of flame-torch wielding tribesmen have gathered around the large stone structure, and in accordance with the governing rules of any video game, this dangerous spot just so happens to be where we need to get to. Using the rabbit, we're able to sneak in and inconspicuously scope the area. Doing this, however, carries other risks.

While swimming through a nearby body of water (Ancel calls this "rabbit diving" by the way) we’re told that something as simple as going for a dip impacts how the gears of the game world turn.

"Every creature has lots of abilities which you can use to your advantage. The rabbit, for example, you can use to attract big fishes, because you’re food to some animals."

Fortunately, our rabbit survives, and serves his sneaky purpose admirably. Switching back to the bear, we charge into the camp, trampling makeshift furniture and slapping around fragile tribesmen. At one point the bear stands up on its hind legs and lets out a tremendous roar.

"Most animals will try and scare each other, so sometimes you decide you want to avoid a fight, and try and intimidate your enemy to do this. These enemies could go away, but the sound could also attract other creatures to you."

In this case, the roar has no effect on the tribesfolk, but the bear's furious claw swipe takes care of them. After the camp is cleared out, we arrive at an altar and things ... get really trippy.

We don’t want a game that is about spreading love everywhere, nature is about life and death, you’ll have to make choices

As a shaman, the player can create pacts with animal gods, a feature Ancel describes as "gaining a divinity." Although exactly what this affords the player was unclear, at the very least it lets you take control of a new animal type and use its unique abilities.

"This [altar] is a placeholder for the player to do whatever they want. If you bring a rabbit you will get the rabbit divinity, or you could bring a bear. It’s up to you, but you'll have to capture the animal, and of course it’s much harder to capture a bear than something small like a frog."

Although it's difficult to capture the larger animal types, there are opportunities to domesticate them. In one example we were given, the player may find an injured bear cub, feed it for a while, survive with it, and since all creatures "evolve," over time it would become your own adult bear buddy.

"You’re building a group of characters [with the animals]. We want the player to have feelings for them. Landmarks are a simple way of doing it, you can summon divinities and evolve your character like that."

Standing at the altar, Wild gets real weird as things take a turn towards the mythical. Having physically brought a snake to the altar, we've summoned a serpent deity. The skies darken as she emerges from the earth and circles the player, swimming in and out of the ground. In a ghostly voice she says, "Know the price of what you’re asking for," dragging her serpentine "s" sounds just long enough to make us shiver.

It seems, Wild will feature more than the earthly creatures we’re used to seeing in real life.

"We tried to start grounded in reality, but then expanded on ideas and added this little spark. We’ll see how far we go [with fantastical creatures] but we definitely have intentions to explore the magical.

"It’s part of the life of people from this period. Five or six thousand years before Christ, the gods were animals. If you look at Egyptian gods, they were a mix of animals and humans, and now gods are humans--except in India.

"Nature was the most powerful thing on Earth, but we feel we are the most powerful now, so our god’s can't be in nature, because we consider it as not being powerful. With divinity we want to present this idea of gods being a mix between humans and animals."

Being granted control over snakes isn’t as simple as summoning the god and bumping fists with it. Deities require appeasement, and they are cruel. Some may ask you to complete tasks that are designed to show you how the animal lives its life, others may ask you to sacrifice an animal you have on your team.

"The game isn’t black and white. Divinities represent the forces of nature. They could be the sea, it may be calm, or violent. It can take lives. We don’t want a game that is about spreading love everywhere, nature is about life and death, you’ll have to make choices.

"If you want the snake knowledge, for example, you may have to make a sacrifice of another animal. You’ll have to play as a snake for several days, learn what they eat, learn their behaviour. You have to gain the knowledge and understand it."

Ancel speaks about Wild with a love-struck passion, and it makes reconciling the explanations of disparate mechanics into a single cohesive experience difficult. He clearly has a vision for the game, but it feels like there are still pieces of the picture missing. Nevertheless, the ideas are interesting and the enthusiasm is infectious. Whether or not it all comes together in a way that’s compelling is yet to be seen.