We get a look at the latest entry in the Wild Arms series.

Sony stopped by and gave us a look at the third entry in the Wild Arms series, the first installment of the series to hit the PlayStation 2. The game marks the return of developer Media Vision, who handled the development chores on the original Wild Arms but sat out the development of Wild Arms 2, which was handled by Contrail. With a mixture of updated graphics, refined gameplay, and new features, the game is coming together nicely.

The series' shift to the PlayStation 2 has resulted in a graphical overhaul for the game, but fans of the series are likely to be pleased. You'll still be treated to some nice anime cutscenes in the game, which showcase the game's pseudo-Western look and feel. The in-game graphics have obviously been updated but still manage to maintain the feel of the original game. The characters are now fully 3D cel-shaded models that sport quite a bit of detail. The cel shading slightly offsets the models from the more traditionally detailed polygonal environments, much like the 2D characters stood out in the PlayStation games. The various areas you'll find yourself exploring with your crew of four, bulked up by one from the previous games, are vast and feature a healthy amount of detail. The texture work is best appreciated in the dungeon interiors you'll be exploring in the game, which feature nice environmental details, complemented by lighting.

The face-lift also extends to the game's combat system, which features an eye-catching assortment of lighting and particle effects to show off the characters' various attacks. You'll have a nice selection of moves ranging from the ARM attacks seen in the previous games to attacks that use a character's force skills, such as attack combos, using items, or summoning guardian monsters you've equipped on your individual characters. A perk of equipping a guardian is that it will let your character cast spells. The game's new camera, which zips around the field of battle during combat, keeps things lively during the turn-based fights. Despite the new look, combat should be pretty familiar to anyone who's played the previous games.

The same familiarity holds true with the game's dungeon exploration, which has you solving puzzles and avoiding enemy attacks. Puzzles in the game are your standard assortment of box puzzles and locks that require you to use your party's skills in some way. Each character has a unique ability that becomes key toward progressing. Your ability to avoid enemy attacks is dependent on an onscreen gauge that lets you avoid attacks a set number of times. You'll be able to recharge the meter by visiting an inn and getting a good night's sleep or by finding items.

So far Wild Arms 3 looks like a game RPG fans will want to keep an eye on, especially if they're fans of the original game. We've got a demo of the game, so keep a look out for a more detailed preview soon. Wild Arms 3 is currently slated to ship this October for the PlayStation 2. 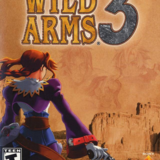