Originally scheduled for a vague "early in 2008," WiiWare now has an official date--in Japan at least. The platform is coming to the country on March 25 and will feature nine games available for purchase to begin with, each weighing in at between 500 and 1,500 Wii Points.

The first is Okiraku Ping Pong Wii by Arc System Works, a table tennis game for one to two players (using a split screen), which will cost 500 Wii Points (approx £3.50, $5). Next up is Kotoba no Puzzle Mojipittan by NBGI, a word puzzle game for 1,000 Wii Points (£7.50, $10), and Konami's Saku Saku Animal Panic for 800 Wii Points (£5.60, $8), a puzzle game in which one to four players have to fence off animals so that each type of animal is separated from the rest. Fluffy bunnies sharing with crocs, after all, doesn't tend to end well.

Star Soldier R is the fourth game and comes from Hudson Soft for 800 Wii Points. The game is a shooter with a difference: There's a very short time limit of either two or five minutes in which to obtain the highest score possible, and rankings will be registered. Square Enix's Final Fantasy Crystal Chronicles: My Life as a King is the most expensive of the seven games, costing 1,500 Wii Points to play (£10.50, $15), and puts gamers in the shoes of a king confined to his kingdom who builds a city by following hints from his adventurers as to what they need (for instance, an inn, or an armourer).

G-Mode has added a one-player card game with three different modes: Angel's Solitaire, Klondike, and Tower Off. It will cost 500 Wii Points. Nintendo's own offering, Dr. Mario & Bacteria Extermination is a puzzle game that sees the good doctor throw two-coloured pills into a Tetris-style grid, and when four colours in a row are matched, the row disappears. There are two different modes, which one to two players and one to four players can play, respectively. Dr Mario & Bacteria Extermination costs 1,000 Wii Points.

The eighth game, a Pokemon title called Everyone's Pokemon Ranch, is a one-player game for 1,000 Wii Points. Gamers can bring their Miis to the ranch, and can use the DS games Pokemon Diamond and Pearl to bring Pokemon to the ranch. You can then take "photos" of your Mii with the Pokemon and "share them with your friends."

Last but not least is Lonpos from Genki for one to four players and 1,000 Wii Points. It's another puzzle game, and it looks very much like Pentominoes, the game that inspired Alexey Pajitnov to create Tetris. Gamers have a series of differently shaped pieces that they need to fit into a board. Up to four players can play.

WiiWare is set for release in North America on May 12, and isn't yet dated for Europe or Australia. The idea behind the platform, which is part of the Wii Shopping Channel, is that independent developers can create small game projects without the financial risks associated with having to sell their games at retail. 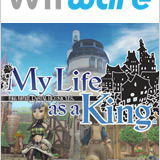 Final Fantasy Crystal Chronicles: My Life as a King
Follow