Your Amiibo can level up alongside you as it plays.

While they might be expected features, Nintendo had yet to confirm that its upcoming Wii U game Mario Tennis: Ultra Smash would support Amiibo figures or online multiplayer. We now know that both of these are present in the game, as well as the details of several other game modes.

Amiibo figures can be placed on the GamePad to summon an in-game version of the character. They can then be used to play online doubles matches or as a partner in the offline Knockout Challenge mode. As the Amiibo figures play more games, they'll level up, improving their control, increasing their max speed, and so on.

As the video above demonstrates, you can use a combination of the GamePad screen and TV to play multiplayer. One player can have their own screen on the GamePad while others play on the TV using Wii remotes, Wii U Pro controllers, or Classic Controller Pros..

Ultra Smash was first announced at this year's E3. It's slated for release on November 20 for $50. 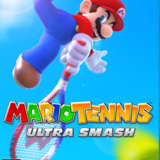