The NPD Group issued its report for June game sales today, which saw the Xbox 360 surpass the normally dominant Wii in console sales. Nintendo wasted little time in spinning the sales data, pointing out the Wii has now nearly sold 30 million units in the US alone. During its last financial report in May, the game giant said worldwide sales of the console were near 71 million.

As usual, the overall hardware best seller was the DS in June with 510,700 units. According to Nintendo, that pushed the handheld's domestic life-to-date sales to almost 42 million. In the aforementioned May report, Nintendo said the line of double-screened portables--including the original DS, DS Lite, DSi, and DSi XL, had sold over 125 million units worldwide. The next installment in the series, the 3DS, was unveiled at last month's Electronic Entertainment Expo.

Nintendo was also quick to trumpet the success of Super Mario Galaxy 2, which was the second-highest seller in June. The sequel to GameSpot's 2007 Game of the Year has now sold over 1 million units in two months domestically, racking up 548,400 copies at the register in June and 563,900 units in May. 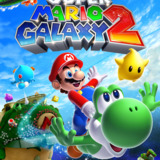