Wii 2 in production, Miyamoto out of ideas?

Source: See below. What we heard: This morning many Nintendo fans perusing RSS feeds did a spit-take upon seeing two headlines, both from the online edition of British industry-news magazine MCV. The first proclaimed "'Wii 2' in production, confirms Nintendo," apparently indicating the... 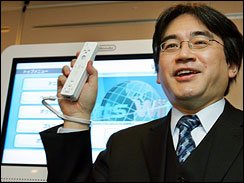 What we heard: This morning many Nintendo fans perusing RSS feeds did a spit-take upon seeing two headlines, both from the online edition of British industry-news magazine MCV. The first proclaimed "'Wii 2' in production, confirms Nintendo," apparently indicating the successor to the console is ready for manufacturing. Another piece on the site titled "Wii Music 'Miyamoto's last idea'" gave the impression that the legendary game designer had finally hit a creative wall after three decades at Nintendo.

Unsurprisingly, the eternal game of telephone that is the forumsphere reverberated with the double-shot of news--news that actually originated from a single article in The Wall Street Journal. Titled "Keeping Up Nintendo's Momentum," the piece is a collection of quotes from an interview the financial daily's Japan correspondent did with company president Satoru Iwata. But while a pair of the executive's comments led to MCV's attention-grabbing headlines, upon closer inspection, their meaning radically diverges from what said headlines imply.

Concerning the Wii's successor, Iwata said, "The hardware team started work on the next thing as soon as they were done with their previous project, but what they think up doesn't necessarily become a product." (Emphasis added.) He went on to emphasize the conceptual nature of Nintendo's next console, and to underline the fact there is no actual Wii 2 product yet--let alone one in production. "We only turn something into a product after it's been thoroughly vetted inside the company," said Iwata. "We're not at a point where we can give specifics, but of course we're working on it."

As far as Miyamoto goes, Iwata said that Wii Music, the rhythm title awkwardly demoed at Nintendo's E3 press conference, was the last of the designer initial concepts for the Wii. "Wii Music completes what Miyamoto wrote in his proposal when he came up with the idea for the Wii," Iwata told the paper. The executive continued, "He was saying that he needs to think up more ideas now," indicating that far from being at his wit's end, Miyamoto is hard at work on Nintendo's next big thing.

The official story: See above.

Bogus or not bogus?: Not bogus that the Wii's successor is in the early stages of development--as is the fourth PlayStation and the Xbox 720 (working title). However, it's 100 percent bogus that Miyamoto has had his last idea. That won't happen until the 55-year-old designer jumps off into the great Mushroom Kingdom in the sky.

There are 370 comments about this story
Load Comments (370)