After long dismissing online play as not being central to gaming, Nintendo is fast becoming one of Web-enabled multiplayer's biggest boosters. Today, the Japanese game giant announced the latest game that will be playable via its wireless gaming network, the Nintendo Wi-Fi Connection.

But while the game itself is new, it is also the latest spin on a very old-school brand. The title in question is Tetris DS, a reworked edition of the 1985 Soviet puzzle game. It will add six new modes to Tetris' classic block-combination gameplay, all of which will incorporate the DS's second, touch-sensitive screen.

Each new mode of Tetris DS will have a theme based on a popular Nintendo property like Super Mario Bros., The Legend of Zelda, and Metroid. There will also be several multiplayer modes, including two- or four-player contests over the Wi-Fi Connection. For ad hoc bouts, up to 10 players will be able to play a single multiplayer match using just one copy of the game.

Tetris DS is set for release on March 20, the same day as the highly anticipated, wireless-enabled Metroid Prime: Hunters. The pair will join three other games on Nintendo's Wi-Fi-Connection: Mario Kart DS, Animal Crossing DS, and Tony Hawk's American Sk8land. No pricing or rating for the game has been announced. 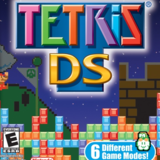