Why It Matters: Storytelling

A good story can go a long way.

Games are more than just a bunch of parts cobbled together to make a whole--they are entire experiences that touch different parts of our psyche using the various tools developers have at their disposal. Metal Gear Solid 4: Guns of the Patriots and Super Mario Galaxy 2 are very different experiences, yet both succeed at what they attempt to do because the pieces and parts come together to make a cohesive whole that effectively communicates a single vision.

Part of my job as a critic is to tell you whether or not something is good and why. But a review can only go so far; I could spend page after page analyzing and dissecting various aspects of different games and comparing them to other games that attempt to create similar things with greater (or lesser) success. It's something I wish we saw more of: clear-headed thoughts on what makes one game better than another and how the pieces of those games add up to a successful (or unsuccessful) work of art and entertainment. Have you ever seen a line like this in a review? "I couldn't quite put my finger on it." Or, "I can't quite explain it." I think that's a cop-out; it's our job to put a finger on it. The more we apply creative and analytical thinking to games, the more we can and should expect from them.

If we insist that games be considered art, then we need to treat them as such. A painting can be pretty, but that doesn't make it great. In the same way, a game can be fun, but that isn't enough to make it special. Game criticism can, and should, stake out its place in analytical journalism. But that won't happen if critics are content to only skim the surface. Please note: Spoilers follow. Proceed with caution.

I've mentioned this before, but I want to reiterate an important point regarding narrative: "Story" is more than just "plot." You can reduce a story to "What happens between point A and point Z," but anyone that's read a book, watched a movie, or played a game can tell you that storytelling is far more complex. Story involves characterization, dialogue, theme, and more. Effective storytelling also involves the use of language. Wooden dialogue can make characters ring hollow; metaphors can be effective, but bad ones seem cheesy or didactic. In writing, word choice makes a difference. Alliteration and other tools can make a sentence flow. A description of a beautiful sunset is enhanced by lilting, flowing sentences, whereas an action scene needs punchy words and onomatopoeia ("Boom!").

Film, theater, and games benefit from the addition of audio and visual storytelling--a glance between lovers; the call of a crow; the flame of a candle in a dark room. As they say, a picture is worth a thousand words. Thus, cinematography becomes part of the story, as does the design of the world in which it takes place. Camera angles and movement, scene props, color palette--they communicate to us, both overtly and covertly. In romantic films, furtive looks and subtle facial expressions communicate more to us than words could in those moments. Close angles in a suffocated room can make an angry exchange even more intense. Take games like Limbo or Machinarium. No character utters a single word of dialogue, but the games absolutely tell stories using visuals and sound. But that isn't just because both games effectively use elements other than speech to communicate events, theme, and tone: It's also because when you play a game, a narrative develops as you interact with it. 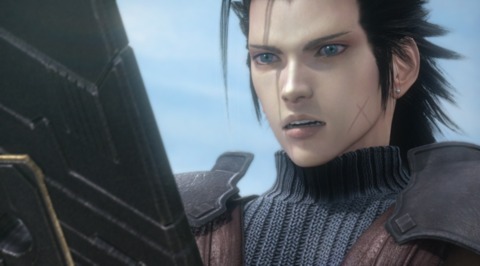 This game's ending shows how gameplay doesn't just benefit from storytelling--it is storytelling.

In other words, gameplay is also part of the narrative, and story and characters can develop without a single line of dialogue. In Ico, an incredible and touching bond develops between the characters of Ico and Yorda, which has a lot to do with gameplay mechanics. Yorda needs your help, as Ico, to lift her to higher places and protect her from attackers. Holding her hand and calling out to her are both gameplay mechanics, yet they have everything to do with how well the game communicates a developing bond between two characters who speak different languages. This is an extreme example; almost every game communicates to us like this in one way or another. Crisis Core's ending communicates the futility of Zack's actions. In Grand Theft Auto games, the lines you overhear bring the city to life and become part of your personal narrative. Just shooting a bunch of aliens is part of that narrative because they constitute an event in that timeline. Gameplay is story, too--the kind only a game can tell.

Whenever I discuss a story in a review--whether in a positive or negative manner--I often have people ask why it matters. Someone asked me recently, for example, why Bulletstorm's story matters. After all, isn't it enough that the game is fun? Super Mario Galaxy tells almost no story at all, but it does just fine, right? The difference is, of course, that the game itself determines how important its story is to it. Not every game needs a big story to be awesome, but when a game spends a lot of time telling one, it's asking you to pay attention to it. Many games are primarily about story. Most point-and-click adventure games are essentially interactive stories in which the player must solve puzzles to progress to the next event. Heavy Rain is all storytelling; its gameplay serves to enhance your connection with the story. I wouldn't call Heavy Rain fun, but it was still one of my top 10 games of 2010. (Just as I wouldn't call many of my favorite films "fun.") Other games are content to frame the gameplay lightly, allowing it to speak for itself and letting the player-developed narrative take center stage.

Bulletstorm and Killzone 3 are both good examples of how a game is affected when a story doesn't work. Both are great games, but both spend a lot of time trying to weave a tale that doesn't work. I think Bulletstorm's language could have been funny if delivered effectively. Pulp Fiction is a great film with a lot of raunchy dialogue, but that dialogue is an important part of a violent, surreal, and darkly funny story in which each aspect works to form a whole. Bulletstorm, on the other hand, is divided. It has raunchy language spoken by meat-headed characters (not necessarily a bad thing, mind you); a straightforward sci-fi plot with a few twists you probably see coming; and a beautiful lost paradise with a backstory you gradually uncover as you play.

Those things are fine on their own, but together, they lack cohesion; contrast that with other shooters in which individual aspects are designed to fit together. Serious Sam, for example, is absolutely surreal, and everything about it is designed to be that way. Of course, Serious Sam is not a story-heavy shooter in a traditional sense, but it knows what it is, and every aspect of it is designed around a vision. I would say the same thing about Duke Nukem. BioShock is a very special game precisely because everything is built to elicit claustrophobic apprehension. Half-Life 2 is my favorite shooter of all time in part because you always feel like you're on the run from an enemy you don't quite understand in a fully realized environment that's familiar enough to keep you grounded but strange enough to be frightening. Shooting can be fun. Shooting is better when you care about why you need a gun in the first place.

Again, not every game needs strong storytelling to be awesome. Killzone 2's story was just sort of there; the details that made that game special existed outside of the story and were outstanding enough to veil the weak tale. With Killzone 3, Guerrilla took a bizarre route: It made the story aggressively bad, gave us much more of it than before, and made it intrude much more often.

We can look to Killzone 3 as an example of a game in which the experience suffers because of the story. Consider, then, Mass Effect 2, a game that succeeds precisely because of story. Remember: Story is more than plot. Mass Effect 2's plot is no standout, but that plot is a solid skeleton from which to hang its fantastic characters, places, and dialogue. The visual storytelling is top-notch. I spent hours being weirded out by how waxy Miranda looked, and later, her story arc caused me to make sense of her design. Quick camera cuts make Mordin's jittery demeanor seem even more hyperactive. You practically know what Aria is like the minute you walk into Afterlife, what with its pulsing music, rich purples, and flaming hallway. 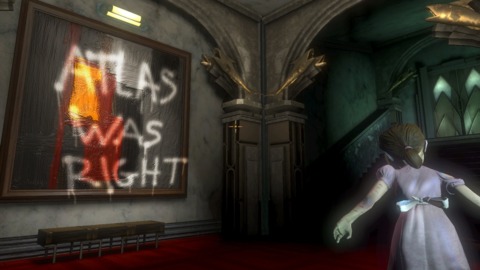 Without Rapture, would BioShock have been as shocking?

Imagine, Mass Effect 2 as a pure shooter, without dialogue, great characters, and a vibrant world. Consider how different it may have been--and most likely, how much worse. Now, Mass Effect 2's action is fine. What elevates it is context, which comes back to what I said earlier: Shooting is better when you care about why you need a gun in the first place. That isn't to say every game needs to be like Mass Effect 2 or that shooters need to tell involved tales. But it does prove that games can be more than mindless entertainment. Heck, I like summer blockbusters like the rest of you, but that kind of experience is very much of the moment. I would rather spend my time and money on games that stay with me after I shut them off. Aren't the best games the ones that you think about even when you aren't playing them? That isn't always because of the story, but story can be one of those elements that push the game over the edge from good to amazing.

Think of all your beloved game characters and imagine how their games would be if they were replaced by a no-name grunt. Or think of your favorite gameworlds and imagine the game taking place somewhere else. Or think of your favorite stories and imagine the games they took place in without them. What would Metal Gear Solid be like without Snake? What would Half-Life 2 be without City 17? What would BioShock be without its setting, audio logs, and philosophical underpinnings? These games stay with us long after we're done with them. If the gameplay didn't have the context it did, we probably wouldn't care as much as we do about these games, many years after we played them.