Why DRM Sucks, According to Magicka Developer Paradox

"It can punish players who actually bought the game," Paradox Interactive CEO says.

The Witcher developer CD Projekt Red and Assassin's Creed studio Ubisoft aren't the only companies that think DRM is a waste of time for PC games. Speaking with GameSpot, Magicka and Hearts of Iron developer Paradox Interactive CEO Fredrik Wester outlined why he thinks DRM can be such a headache and provided some steps that he thinks will convince people to buy legal copies of Paradox games.

"It can punish players who actually bought the game," Wester said about DRM. "I remember buying Civilization III, and I couldn't install it because I had something else installed. I had to uninstall two different programs, change settings...it was a hassle."

"I have no idea how many of our games are pirated. We don't really have any intention of finding out or hunting these people" -- Fredrik Wester

"If I had pirated it from anywhere, I would have gotten it much faster, more convenient," Wester added. "So we don't want to put barriers on convenience for the gamers. It should be more convenient, you should get more content, it should be easier for you to install if you buy the legal copy."

How do you stop people from pirating your games, then, I asked Wester. "Well, we don't," Wester said with a laugh. Instead of hunting pirates down, Wester says Paradox is focusing on providing a better gameplay experience overall. This, Wester says, will encourage people to buy legal copies.

"I have no idea how many of our games are pirated," he said. "We don't really have any intention of finding out or hunting these people. What we want to do is provide people who bought the game legally a better service. With frequent updates; good and convenient services; that's how we fight piracy. I hope it works. I keep my fingers crossed."

Wester also pointed out that Paradox is a "highly profitable" company already, so launching an anti-piracy campaign at this juncture doesn't make a lot of sense.

For more on Wester's thoughts about the video game industry, be sure to read the first part of our interview, which ran yesterday. In that piece, Wester talks about how the industry has changed since Paradox was formed a decade ago, including his thoughts on women in video games.

Paradox is currently working on Hearts of Iron IV, Magicka 2, and Runemaster. Magicka 2 was announced at E3 during Sony's press conference. However, Paradox has signed only a timed-exclusive deal with Sony for the game, so it's possible it could come to other platforms later. 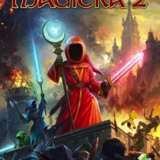