Who Wants to Be a Millionaire: Party Edition Hands-On

Who Wants to Be a Millionaire: Party Edition is the first third-party title to use the Sony Buzz! controllers. We phoned a friend at Eidos to get some time with the game.

The TV show Who Wants to Be a Millionaire may be on hiatus in the US, but it's still pretty popular in the UK. Coincidentally, game show video games are also proving to be in style right now, thanks in no small part to Sony's peripheral-based PlayStation 2 series Buzz! In theory, the two should go hand in hand, and with Eidos signing the necessary paperwork, Who Wants to Be a Millionaire: Party Edition will be the first third-party game to use the Buzz! peripheral. For those who haven't played a Buzz! game before, the peripheral features four coloured buttons for answering questions and a flashing red buzzer on top. While Sony's controller will help to make the Millionaire experience feel like a proper game show, WWTBAM: Party Edition will also work with the standard Dual Shock 2 pads. Up to four people can play the game via either control system, although a multitap will be needed to link up the Dual Shock pads. As with previous Buzz! games, a choice of 16 characters are available to represent you in-game. The majority of these characters are stereotypes, such as Haxor the computer geek.

Wrapped around these features are all the trademark aspects of the TV show itself, which is based on the UK version of the programme. Developer Climax has had the full support of programme-maker Celador in making the game as authentic as possible. The famously intimidating set of the show has been re-created in video game form, complete with the overly theatrical music and dramatic lighting. Arguably the most important part of the game is UK host Chris Tarrant's vocal input, but there are also thousands of recordings for the "phone a friend" feature, which range from being quite helpful to completely misleading. Speaking of questions, all 4,000 have been researched by the TV show's question writers, and as you reach the upper echelons of the prize money, they really do become quite difficult.

While the suffix of this particular WWTBAM title is "Party Edition," one of its main attractions will still be the authentic single-player experience. The game re-creates the show's experience, and your goal is to work through 15 increasingly difficult questions, trying to win that elusive £1 million prize. However, three difficulty levels change the rules of the game slightly. Easy mode gives you three lives to lose if you get questions wrong, in addition to having the three famous lifelines of 50:50, ask the audience, and phone a friend. Medium difficulty still offers the lifelines but removes the lives, while at the hardest level you'll have to answer all the questions without any help. The other single-player game is the quick-fire mode, in which questions have to be answered against the clock.

The single-player mode offers the purest Millionaire experience, but the multiplayer version of the game will still go down well with friends and family this Christmas. Dipping into the millionaire party mode at Eidos' office, we were able to compete in a three-player game that varied quite a lot from the TV show. In this mode, the aim is to climb up the money tree by answering the most questions correctly before anyone else. To answer a question, you must buzz in and pick the correct answer within a second, because if you're too slow, another player can buzz in and steal it. You can also choose to double dare someone if you think he or she doesn't know the answer. If the player gets it wrong, he or she will fall two places down the money tree. On the other hand, if the player answers correctly, he or she will gain two places, so you have to use this option wisely. Players have three lives to lose if they get questions wrong, and the game continues until the last player uses up all his or her lives.

This isn't the only multiplayer feature in WWTBAM: Party Edition, because there are four more party games in total. The play-or-pass mode is fairly self-explanatory, letting you choose to answer a question or pass it off onto someone else. In the millionaire remix mode, the idea is to collect lives and lifelines to have the greatest chance of reaching the £1 million prize. Multimillionaire is a team-based version of the game, in which you take turns to answer questions and share lifelines with everyone else. There's also the same quick-fire mode as in the single-player game, where it's all about answering the questions as quickly as possible.

In addition to using the Buzz! controllers, WWTBAM: Party Edition will support Sony's EyeToy camera. The peripheral will let you take photos and display them on the scoreboard, as well as on the winning cheque presented at the end of the game. While the game isn't online-enabled, it will provide players with codes that can be entered at the Millionaire's Club Web site. This will let you compare your winnings with other people around the world.

At this stage, WWTBAM: Party Edition appears to offer everything you'd expect from a game that is based on the much-loved TV series. Fans of the show may find the cartoon styling of the characters at odds with the general design of the show, but there's no doubting that the overall authenticity will immediately strike a chord with a wide audience. If Eidos can now work on a USB cash-machine peripheral to work alongside the game, then we may well have the perfect Millionaire video game. 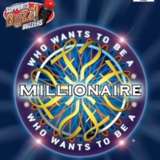 Who Wants to Be a Millionaire: Party Edition
Follow

View Comments (6)
Who Wants to Be a Millionaire: Party Edition