Who the Hell Is James Vega?

401 Comments
Where to buy
Mass Effect
$14.99 at Amazon
There are no available deals for this platform
GameSpot may get a commission from retail offers.

To be perfectly honest, I can't muster much enthusiasm for most of the issues people are having with Mass Effect 3. If you want to rail against homosexuality or sequels or unhappy endings, then to you I say, "OK," and then, "I'll be over here." The problem here--the real problem--with Mass Effect 3 can probably best be summed up by the question, "Who the hell is James Vega?"

In the beginning of Mass Effect 3, there's me, Commander Shepard, messianic intergalactic badass on a bit of a tear, up in my office, alone. I'm staring out the window at a small boy playing in a nearby park. Why? That's not important. James walks in.

"You're not supposed to call me that anymore, James."

"Not supposed to salute you, either…"

First of all, who is this hulking Herc of a man that's in my office? Second of all, why is he talking to me like he knows me? Third of all, why am I in an office and not on the Normandy? Fourth of all, how long will that child be alone? And then Admiral Anderson comes striding up in full Systems Alliance Navy regalia to tell me I look fat. And that I've been relieved of duty. 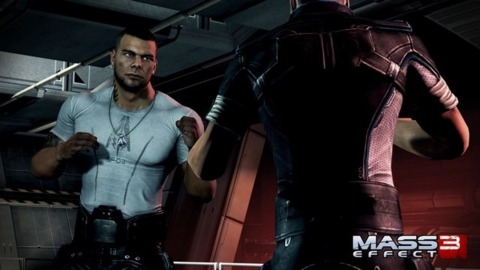 Meet James Vega. You and he get in a fistfight-for-bros within the first hour of Mass Effect 3.

Wait, what? Umm, no, I'm sorry. You seem to be mistaking me for someone who hadn't just blown up the Reaper flagship Sovereign and then, basically immediately after that, blown up the Collector base, saving the known universe in the process. Someone who hadn't just leapt over a chasm to put Jessie Owens to shame, onto a ship with my full crew alive and accounted for, to give the Illusive Man a couple of these ,,|,, ,,|,,. Sure, I was flying the colors of a mercenary at the time, but what the hell who cares I've just saved the known universe.

Let's start with that first question. Who is James Vega? Crap, the official Wikipedia page has no idea. Let's try Wikia. There we go. James Vega is a prison guard assigned to keep tabs on Commander Shepard. I'm in prison? Weird, I thought I was a messianic intergalactic badass on a bit of a tear. What's up? To the YouTubes. Hmm, it would appear as if I destroyed a Mass Effect relay gate in the batarian system, killing approximately 300,000 poor batarian bastards in the process. Mother of god.

The explanation for these lacunae is that I never read the Mass Effect mini-comic Conviction, which according to Dark Horse Comics is only available through participating comic retail stores, and I didn't play the Mass Effect 2 add-on Arrival, which cost $7 and received a 5.0 (aka mediocre) review score from GameSpot. And just to be clear, I don't plan on picking up Mass Effect: Paragon Lost, a FUNimation-produced anime that shores up Vega's "not supposed to salute you" and won't even be out until later this year.

What else do I not plan on picking up? Well, there's Mass Effect Galaxy, an iOS game set between Mass Effect and Mass Effect 2 that Jacob Taylor, Miranda Lawson, and the aforementioned quad-ocular batarians (IGN gave it a 5.0, we didn't review it; not currently available in the US, previously $5). There's Mass Effect: Infiltrator, also for the iOS, which follows Cerberus operative Randall Ezno as he uncovers weird Cerberus science experiments ("one big mess (effect)"--SlideToPlay.com; $7).

Right now I'm reading Jonathan Franzen's Freedom. Before that, I read Julian Barnes' The Sense of an Ending. I get it. I'm kind of a prick when it comes to books. But that is what it is, and it basically precludes me from picking up the Mass Effect books written by Drew Karpyshyn or William C. Dietz (four books, combined cost = $24). It also means I'm not going to get Admiral Anderson's backstory (Mass Effect: Revelation); Paul Grayson's and the Illusive Man's stories (Mass Effect: Ascension, Mass Effect: Retribution); and Kai Leng's story (the reviled Mass Effect: Deception).

SO MANY COMIC BOOKS.

And then there are the add-ons for the games themselves. This rundown is becoming dreary, so I'll leave you all to Wiki them yourselves. However, I would like to point out that their quality ranges wildly (from 5.0 to 8.5, according to GameSpot) and in Mass Effect 2: Arrival, Commander Shepard, messianic intergalactic badass on a bit of a tear, kills 300,000 batarians. One other shocker from Mass Effect 2 downloadable content: Liara T'Soni is the Shadow Broker. Crazy! I had romance with that alien! How do you relegate such a central mystery from the first two games to a $10 add-on?

Which gets me back to my actual point. When Mass Effect 3 executive producer Casey Hudson came onto my show two weeks ago (see video above), he downplayed the idea that those who just play the three flagship Mass Effect installments will miss out on crucial plot points.

"It's not about missing out, but obviously…So an example would be we introduced the Illusive Man in the novels, so that doesn't mean that when you get to Mass Effect 2, you don't know what's going on, and 'Who is this guy, or whatever?' But you do get some backstory on him before you actually meet him in Mass Effect 2," he said.

When I caught back up with Commander Shepard, messianic intergalactic badass on a bit of a tear, I had no idea what was going on with him. I didn't know I had been kicked out of the military or would be facing a court martial or had made a new BFF in James "Growth Hormone" Vega or had killed 300,000 batarians. And what the hell, Liara's the Shadow Broker?! You're just going to casually drop that line in there in a, "So, how's that working out for you?" conversation not long after catching back up with her on Mars? We had romance! How am I just finding this out?!

Look, I understand the games industry is going through some growing pains and EA feels it needs to turn a dime on this transmedia business. I'll even give it the Mass Effect novels and its Paul Grayson storyline--more story delivered in creative ways is great. But after purchasing Mass Effect 3, I'll have spent nearly $200 on this franchise. I shouldn't have to spend nearly $100 more to find out fundamental details that directly impact my experience of Commander Shepard and his merry band, especially when a surprising amount of that content isn't even any good.

There are 401 comments about this story
Load Comments (401)