What The Golf? Comes To Steam With Surprise Level Editor

What the Golf? has arrived on Steam, and it sports a surprising new feature.

What the Golf?, Triband's hilarious anti-golf game, is now available on Steam, and it comes with a cool new feature. For the first time, players will be able to craft their own unique courses for the game.

The level editor is a surprise addition, and it's in a permanent state of "early access alpha beta preview," Triband designer and co-founder Tim Garbos said in a statement sent to press. The editor has been added because the team's inbox is full of level ideas sent in by players.

As of right now, different versions of What the Golf? contain unique features. The Switch version has Party Mode, the Apple Arcade version contains the Sporty Sports update, and the Steam version is the only "complete" version. GameSpot reached out to the devs to ask if all versions would eventually have parity.

"Sporty Sports will be available on Steam, Epic, Apple Arcade, and soon all the rest," a PR representative told us. "The same goes for all our updates. They will roll out to all platforms." The only exception is the Party Mode, which might not come to the Apple Arcade version.

GameSpot has reviewed What the Golf? twice: once for the Apple Arcade and Epic Store versions, once for the Switch version with Party Mode. The two-player mode was enough to bump the game's score up from an 8/10 to a 9/10. 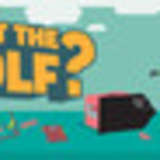