What is Roku? Devices, Differences, And Prices For 2021

Here's what you need to know about Roku in 2021, including the best Roku devices and TVs and how they compare.

These days, you can stream media on practically any device that connects to the internet, from "smart" TVs to gaming consoles. But when it comes to devices dedicated to streaming, Roku is one of the biggest players on the market, offering a variety of inexpensive devices, TVs, and boxes that can play app-based media. The spectrum of Roku devices, of which there are many, can be overwhelming if you're new to the brand's products, so we're breaking down all the top Roku devices, their capabilities, and what you can expect to pay. Here's what you need to know before switching to Roku in 2021.

Roku offers a line of devices you can use to download entertainment apps and watch content from all the best streaming services, including Hulu, HBO Max, Disney Plus, and Netflix (though YouTube TV might soon disappear). Roku TVs come with the Roku OS and streaming capabilities built in. Roku also sells a line of boxes--devices that can connect to your TV via HDMI or wireless.

Roku isn't designed to be part of an existing ecosystem. So if you're an Amazon Prime subscriber and/or have an Alexa device, for example, you may want to opt for a Fire Stick instead of a Roku. Similarly, the Apple TV 4K is designed for integration with Apple products, which makes it a great option for those who already have an iPhone in their pocket and an Apple Watch on their wrist. For people who aren't particularly invested in either Apple or Amazon products, however, Roku devices can be a cheap and reliable option.

Roku offers a variety of boxes, ranging from $30 on the low end to $180 at the most expensive.

The Roku Express is the cheapest option at $30. This box is the most basic Roku product and only supports streaming in HD, making it the only Roku device incapable of 4K resolution and HDR. The Roku Express comes with the device itself, an HDMI cable, and a simple remote without voice search capability.

The Roku Express 4K+ is one step up at $40. This is a slight upgrade over the Roku Express, boasting 4K and HDR, plus a remote with voice search. This device connects wirelessly, with no HDMI needed. The Roku Streaming Stick+, on the other hand, plugs into your TV's HDMI port and costs $50. It's also capable of 4K and HDR, but is smaller and more portable than any other Roku device. Like the Express 4K+, the Roku Streaming Stick+ comes with a voice search-enabled remote.

The Roku Ultra is a major step up in terms of quality and price, but it comes with a higher list price of $100. With a quad-core processor, the Roku Ultra is fast and boasts 50% greater wireless range than cheaper Roku devices. Its other features include Bluetooth, Dolby Atmos, Dolby Vision, private listening, and a lost remote finder. The Roku Ultra includes USB and Ethernet ports as well. Its remote is voice search-enabled and has programmable shortcut buttons.

Roku also sells a pair of Roku-enabled soundbars. The cheaper of the two options is the Roku Streambar ($130), which can connect to TVs and Bluetooth-enabled devices. The Roku Streambar is designed to amplify dialogue volume and dampen commercials. Its remote is also voice-search enabled. On the pricey end of the spectrum, the Roku Streambar Pro retails for $180 and has all the benefits of the basic Streambar, plus virtual surround sound and programmable shortcuts on the remote. Both soundbars are designed to be easily supplemented by additional speakers.

There are also a few retailer-exclusive Roku devices that differ only slightly.

Two devices are available exclusively through Walmart. At $35, the Roku Express 4K is five dollars cheaper than the Roku Express+. It's the same in every way, except it comes with a simple remote that isn't capable of performing voice search. The other exclusive, the Roku Ultra LT comes in at $69, with 4K, HDR, and a quad-core processor for added speed. It supports wired and wireless connections and comes with both headphones and a voice search-enabled remote with a headphone jack for private listening.

Roku TVs come in hundreds of models from a wide variety of brands. Hisense, TCL, Sanyo, Westinghouse, JVC, Element, RCA, Philips, Hitachi, Magnavox, Onn, and InFocus all manufacture smart TVs that come with the Roku OS built in. Instead of needing to plug in a device, you can use the Roku interface on your TV out of the box--a convenient option for households that stream a lot of different media. 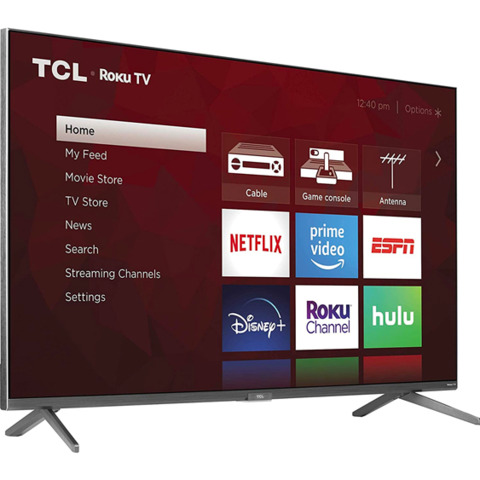 Though many brands offer TVs with Roku built in, the TCL 6-Series is one of the best options you can buy, offering great value for the price. The TCL 6-Series 4K TV with Roku offers a brilliant picture with mini-LED backlights and full-array local dimming. It also features a THX game mode that keeps input lag low and gameplay smooth.

Note that it doesn't have HDMI 2.1 ports, which are required to take full advantage of next-gen console power with 4K and 120Hz, though the number of games supporting that is currently low (see our guide to the best TVs for PS5 and Xbox Series X if you're willing to pay more for that future protection). But if you're looking for an affordable Roku TV with a stunning 4K picture for streaming shows and movies, it doesn't get better than the TCL 6-Series--and our friends over at CNET agree.

Unlike with a cable box, purchasing a Roku device is a one-and-done deal. You aren't renting the equipment; you own it. All you need to do is create a Roku account, and once that's sorted, you can add all your favorite apps, manage subscriptions, and stream content from your Roku device. In order to use Roku, you will need a consistent Internet connection--though Roku TVs, when paired with an antenna, can pick up local stations without the need for a Wi-Fi connection.

Once connected, you will interact with your Roku device using the included remote. The Roku OS has a tile-based look, and you can scroll through your apps using the directional pad on the remote or search for content across all apps. For example, searching "Tom Hanks" might bring up Castaway on Hulu, Greyhound on Apple TV+, Big on Disney+, and Saving Private Ryan on Netflix. You can do the same for other keywords like a movie's title or a director's name. This is incredibly convenient when you have a movie or show you want to watch, but aren't sure which service it's available on.

Do you need a Roku subscription?

You don't need a paid subscription to use Roku. Buying your Roku device is a one-time purchase with no strings attached. However, Roku will require you to have a payment method on file when you create your account. This allows you to purchase videos on demand and pay for subscriptions like Netflix and HBO Max if you manage them through Roku--you won't be charged otherwise. Roku doesn't require a subscription on its own, but it does provide a hub for managing other services, including canceling or renewing streaming subscriptions. This can be convenient if you want to keep track of all of your subscriptions in one place.

What is the Roku Channel?

The Roku Channel is free and included with all Roku devices, which is good because it doesn't offer much you would want to pay for (despite recently debuting its first original series). It can also be supplemented with premium subscriptions to Epix, Showtime, AMC+, and others. The Roku App, which is also free, functions as a voice-controlled remote. It allows private listening when watching on your TV and allows lets you watch the Roku Channel on the go. Using your phone, you can easily cast pictures or screen mirror to your TV using AirPlay 2 or the Google Home app.

Final thoughts: Is Roku worth it?

If you're a console gamer, there's really no reason to purchase a Roku device. Sony and Microsoft consoles support the vast majority of media apps, and while there are some holdouts (the Criterion Channel, for example, is not available on PS4 or PS5), the biggest apps are available on both families of consoles. But if you're not a console gamer and aren't invested in Apple or Amazon products, the Roku family of devices can be a great one-time purchase for those who want to stream content on a TV, and they tend to be more affordable.

If you want to watch a ton of streaming content and manage your subscriptions in one place (and don't already own a game console or smart TV), Roku is a reliable and inexpensive solution, with a ton of different devices on offer designed to fulfill a wide variety of needs. Whatever your budget, you can find a Roku that won't break the bank.