What a Difference a Screen Makes

Tom questions why the 3DS's screens look so shabby compared to the Vita's.

For the past few months, I've been immersed in Nintendo's expansive portable history. Through the wonders of the Virtual Console and the Ambassador Program, I've been in nostalgia heaven, playing decade-old games that somehow passed me by the first time around. I spent hours drifting along in a happy bliss. But then, a rude awakening occurred: The PlayStation Vita was placed in my lap, and the ignorant bubble I so happily resided in was shattered. As good as the Nintendo 3DS's library is, I cannot for the life of me comprehend why it has such a crummy screen. 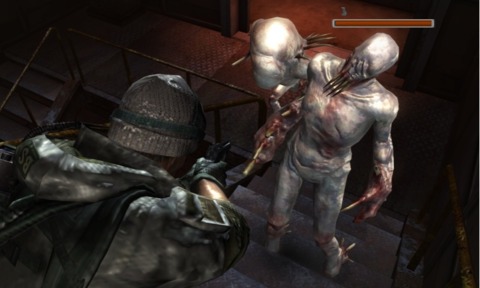 Not like that blob beast is going to win any beauty contests.

Truthfully, the expansive disparity between the 3DS and the Vita was not apparent until I pulled away from my time playing Game Boy and Game Boy Advance offerings to check out something more modern, namely Resident Evil: Revelations. The game feels incredibly smooth and creates a foreboding tension even when surrounded by four-dozen strangers on a crowded train. But the tiny, dimly lit screen fails to carry its share of the slack. The richly detailed environments are lost in that outdated display, and much of the atmospheric wonder is diminished by its inability to properly showcase some of the visual elements of this frightful tale.

In contrast, it is an absolute delight just to stare at the Vita's screen. Take something as simple as Hot Shots Golf: World Invitational. Its inoffensive cartoony style has always relied more on goofy charm than technical wizardry, and the Vita launch game hardly veers from this philosophy. But the vibrancy of the screen makes it eminently welcoming in ways that the 3DS could only dream of achieving. Does this make the Vita inherently more fun? No, but it's difficult to ignore the visual advantages of its impressive screen.

Like the Nintendo DS before it, the 3DS doesn't need two screens

This isn't the first time Nintendo has put themselves at a technical disadvantage. There are undeniable parallels between the Wii and its high-definition competitors and the latest handheld battle, and it gives you an idea of where Nintendo places importance. Cutting-edge visuals take a backseat to the latest novelty. The Wii offered a radically different control scheme that (at its best) fundamentally changed how we played games. However, the innovation in the 3DS comes in the form of a optional third-dimensional viewpoint, and though it certainly looks neat, it's hardly a game changer. But I can at least understand why Nintendo decided to implement this gimmick. It's another decision that has left me confused.

Nintendo shocked the world when it introduced the original DS. Touch-screen gaming was only a pipe dream at that point, so no one realized the unlimited potential that the new interface offered. But the dual-screen aspect--the very thing the system was named after--was often overlooked by developers. Aside from a few novel uses, such as in The World Ends With You or Hotel Dusk: Room 215, the second screen was usually relegated to quick access of your inventory or map. It saved you a second or two of having to pause to check your position, but it was such a small difference that it barely affected the experience.

The Nintendo DS was a massive success (the biggest seller in gaming history), and Nintendo couldn't just walk away from those millions of owners around the world. So, at the expense of its future, Nintendo needed to continue the dual-screen theme with the next system. Like the DS before it, the 3DS doesn't need two screens. Its games rarely take advantage of having a second display, other than the ho-hum use of quick inventory reference. In fact, by making the screens different sizes, it's now far less elegant to combine them into one play area (as in Yoshi's Island DS). 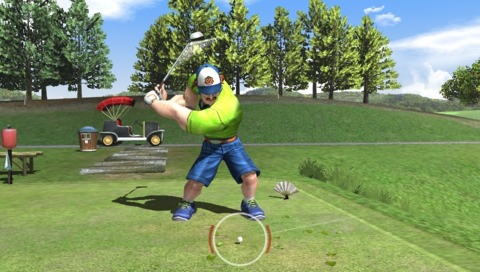 The idyllic beauty of a pristine golf course

Nintendo has never been afraid to circumvent the norm. People laughed at the DS, and yet it was a huge success. When it showed off the Wii for the first time, people laughed even harder, and it was another huge success. But even though it has built its business on taking smart risks, Nintendo is still so stubborn that it refuses to see the limitations of its two-screen approach. Wouldn't it be better for everyone if the 3DS offered one large screen so you could fully appreciate the many great games in the library? Shouldn't Nintendo try to push gaming further instead of recycling old ideas that never took off in the first place?

Backwards compatibility is very important for many prospective buyers, and I understand why people want to hang on to their current libraries without lugging around two separate systems. If Nintendo eliminated that second screen, millions of bitter people would have cursed the fabled company from Kyoto. But people flock to the games, especially Nintendo games, so the 3DS clearly could have survived even if it burned a few bridges. But for reasons that are beyond me, Nintendo stuck with a formula that was rarely utilized, and it has ultimately diminished the potential of its newest moneymaker.

Don't be mistaken, my outrage that the Nintendo 3DS is sporting old technology doesn't mean I don't enjoy playing it. A system's stable of games is what makes it viable, and there are enough quality games out now and planned for the future to ensure it continues to thrive. But sometimes "good" isn't good enough. Just because Nintendo made a design decision seven years ago, that doesn't mean it has to stand by it for all eternity. Progress is the driving force of this and every other industry, and Nintendo has decided to ignore that ideal to perform the same trick all over again.

There are 550 comments about this story
Load Comments (550)