In late 2007, the Writers Guild of America announced a new category dedicated to game writing in its annual awards. However, the following February, the Hollywood trade association got off to a questionable start by bestowing the honor onto the tepidly reviewed Dead Head Fred. The D3 Publisher game beat out such higher-profile nominees as Vivendi's Crash of the Titans, Electronic Arts' The Simpsons, CD Project Red's The Witcher, and World in Conflict, also from Vivendi. 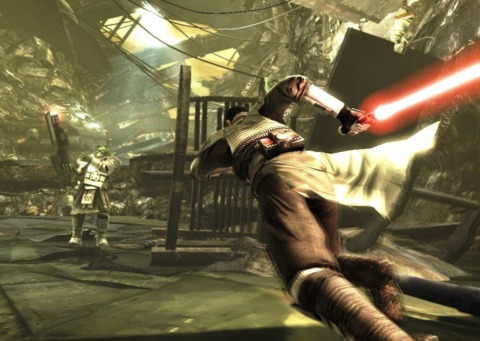 One year later, the WGA has bestowed its second award for game writing to the team behind Star Wars: The Force Unleashed--writers Haden Blackman, Shawn Pitman, John Stafford, and Cameron Suey. The LucasArts game, billed as the seventh chapter in the two-trilogy Star Wars film saga, beat out several high-profile contenders, including Eidos' Tomb Raider: Underworld, EA's Command & Conquer: Red Alert 3, and Bethesda's Fallout 3, GameSpot's top role-playing game of 2008. The casual PC game Dangerous High School Girls in Trouble! was also among the nominees, which must be written by WGA members to be considered.

Developed internally at LucasArts, the best-selling Force Unleashed is set between the ending of the movie Star Wars: Episode III Revenge of the Sith and the beginning of Star Wars: Episode IV A New Hope. The secret apprentice is tasked by Vader to rid the world of the scourge of the Jedi, and the game adds a new layer of backstory to the Star Wars saga.