West Of Dead Coming To PC, Xbox One This Month

The procedurally generated action game will hit this month, with Switch and PS4 versions to follow later.

The noir western action game West of Dead is coming next week, developer Raw Fury announced during the Guerrilla Collective presentation. During a segment devoted to games coming out in June, a new trailer debuted with a release date of June 18 for PC and Xbox One.

In a follow-up tweet, Raw Fury also announced that Switch and PS4 versions of the fast-paced twin-stick shooter will be coming in August.

West of Dead takes place in Purgatory, Wyoming in the year 1888, and features Ron Perlman as the narrator and main character William Mason. It has a stylistic high-contrast art style, and the protagonist has a flaming skull that looks reminiscent of the Marvel comic character Ghost Rider.

The wait is over, Outlaws.

West of Dead is coming. 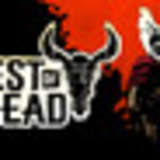