We Were Here Forever Announced For PC, PS5, And Xbox Series X

The co-op puzzle series returns with a fourth installment this year.

The We Were Here franchise will continue this year with a new sequel called We Were Here Forever scheduled to launch in Q4 on Steam, PS5, and Xbox Series X|S.

The sequel promises a co-op adventure with new challenges and puzzles, and a "thrilling" story. Like its predecessors, players will need to work together in co-op to solve a series of new puzzles.

The largest We Were Here game to date, Forever delivers a "big step up," according to managing director Lucia de Visser from developer Total Mayhem.

"Our goal for We Were Here Forever is to further refine the cooperative gameplay people love so much from the series, designed for a new generation of hardware with a more immersive, darker, livelier Castle Rock. We Were Here Forever is a big step up for the series. Furthermore, this game will bring some new insights on the mystery of Castle Rock. One cannot help but wonder what happened to those explorers who got left behind," the developer said.

For those new to the series, you play as an Antarctic explorer who gets mixed up in the wild world of Castle Rock. You're separated from your co-op partner most of the time, so you need to communicate by walkie-talkie to solve the asymmetric puzzles.

The series debuted in 2017 with the free release of We Were Here which tallied 1.5 million downloads. We Were Here Too followed in 2018 as a paid game, with We Were Here Together following after it. In total, the games have collectively reached 5 million players. 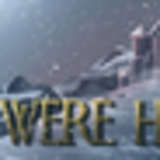