Wrath of Heroes is a player-versus-player online game based on Warhammer Online, and we just played the beta.

Warhammer Online: Wrath of Heroes is the PVP-focused spin-off of EA BioWare's (formerly EA Mythic's) massively multiplayer game Warhammer Online, which was itself based on the rich lore of Games Workshop's Warhammer: Fantasy Battles universe. But while Warhammer Online had a comprehensive player-versus-environment (PVE) game in which players joined characters from friendly factions to explore the countryside, complete quests (both private and public), and eventually gain experience levels, Wrath of Heroes strips away the story and quests and offers a pure PVP experience--one that has nothing to do with gaining in-game experience levels or picking up in-game loot but has everything to do with killing the other team as many times as possible.

The beta appears to currently be running on only one mode for the time being, a match type in which three different teams compete openly against each other and can kill each other off with no restrictions. This mode takes place on the beta map Mourkoun Temple, which has an actual stony temple in the middle of the map…and in the middle of a swamp full of fallen trees and uneven terrain. This map has four different node areas you can capture: three nodes on the map's outer extremities and a massive artifact in the middle of the temple (which is, again, in the middle of the map). It's certainly helpful to capture the nodes and the artifact, since they grant score multipliers whenever your team kills an enemy, but the only way to put actual points on the board is to bury enemy players in the ground.

So, although we successfully pulled off a few sneaky node captures all by our lonesome at the beginning of our beta session, we quickly realized that going off alone just meant that the rest of our team was down a man--and more likely to get killed off to inflate an enemy team's scores. The name of the game in this particular mode is sticking together, isolating targets of opportunity (especially lone players, if possible--better known to online game players as "ganking"), and taking as many of them with you as possible.

The mode lets you play as one of seven different character classes, and you can swap freely between them each time you die, similar to class-based shooters such as Battlefield. The professions include the black ork, the largest character in the beta, who is equipped with powerful melee attacks and the ability to knock a single enemy flat; the human bright wizard, whose flame spells can carpet a certain area with continuous damage; the goblin shaman, who primarily acts as a healer; the witch elf, who uses various types of magic to inflict debilitating effects; the elf shadow warrior, a powerful archer with long-ranged attacks; the vampiress, a spellcaster class that can drain her enemies' health; and the axe-wielding dwarf slayer, the beta's other melee profession.

We put in time with all of the game's classes and found each one to be devastatingly powerful only when used correctly, and less than worthless when stupidly trying to go solo. Thanks to its huge size, the hulking black ork looks like the strongest character right off the bat, and with strong backup behind him, he can shorten your enemies' life spans considerably by using his knockdown ability to pin an opponent to the ground while everyone else on the team whales on their immobilized victim. However, the class is also one of the slowest runners and has noticeably short range on his axe--he's a melee fighter, after all--so swifter enemies can run circles around him, particularly outdoors, and if you give chase to fleet-footed enemies without backup of your own, you'll find yourself quickly slowed or stunned and then chopped into mincemeat. Conversely, the goblin shaman seems like the weakest profession at a glance, since its abilities are primarily based on healing and providing bonuses to teammates, rather than dealing any sort of direct damage, but because the shaman has abilities that let him heal himself and any allies (such as placing a stationary talisman on the ground that radiates a healing aura), a properly played shaman seems like one of the hardest classes to kill. On the whole, ranges and spacing seem to be of paramount importance in Wrath of Heroes' battles--one of the best ways to avoid a deathstroke is to jump out of its range at the last second.

Currently, Wrath of Heroes' beta PVP skirmishes seem fast-paced and messy. Once the battle relocates to the inside of a temple--and it always seems to--the already-quick combat becomes even more frantic, and targeting individual enemies (you can cycle through nearby enemies by tapping your keyboard's Tab key) occasionally gets iffy, especially with friends and foes strafing around like mad and magic spell effects going off every second. Still, this is fast-paced PVP without having to grind for dozens of experience levels just to get there. In addition, Wrath of Heroes appears to have a persistent level system for your account that will increase with victories and kills. We imagine the level system will be tied to some sort of metagame with unlockable content and possibly some sort of talent tree, not unlike the rune system of League of Legends, though EA hasn't confirmed exactly what this level system will mean. 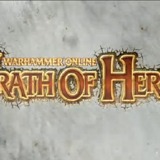