Space Invaders Extreme for Xbox 360 likes to mess with your eyes. It's full of dirty visual tricks that keep your eyes darting across the screen at a frenzied pace. It's also great fun. The game, which came out on the Nintendo DS and PSP last year is being revamped for Xbox Live and I got a chance... 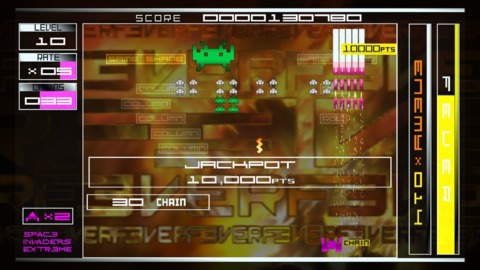 Space Invaders Extreme for Xbox 360 likes to mess with your eyes. It's full of dirty visual tricks that keep your eyes darting across the screen at a frenzied pace. It's also great fun. The game, which came out on the Nintendo DS and PSP last year is being revamped for Xbox Live and I got a chance to check it out during a visit by producers. I was reasonably familiar with the handheld versions of the game--including playing it on the DS as nature intended it: with the DS paddle controller--but seeing the game's stylized visuals on the big screen brings a whole new level of challenge to the game.

Taken piece by piece, SIE isn't all that impressive visually. The enemies are still the basic building-block sprites you'd expect from a proper Space Invaders game. However, toss those enemies together into a slew of different formations, mix them up by color, give them unique behaviors, then toss in a bunch of neon-colored madness occurring everywhere on the screen as you transition from one game level to the next (as well as in and out of impromptu bonus rounds), and you've got an beautifully complex visual feast that's constantly changing to keep your eye engaged.

If you haven't played it before, Space Invaders Extreme is a remake of the original arcade game. The goal is still the same--blast the endless hordes of pixilated invaders before they reach the bottom of the screen. What SIE does so brilliantly is take that very basic concept and twist it in increasingly surprising ways. For one thing, the static enemies from the original aren't happy with merely winding their way down the screen. They're up to no good. Some will split in two when shot. Others will make themselves extremely thin temporarily, making them that much harder to shoot. Others carry shields. All are designed to make your life miserable… in a fun way.

While you can certainly play SIE as a straight-ahead shoot-anything-that-moves arcade game, the more you play, the more layers of the strategic onion you begin to peel back. For example, shooting enemies of one color in succession will earn you power-ups like lasers and spread-shot weapons which you can use to temporarily wreak havoc on enemies. A vertical meter on the right-hand side of the screen will quickly deplete; when it does, your power-up will run out. However, in another strategical twist, you can actually pause that meter by holding down either the right or left bumper. Doing so will revert your upgraded cannon into its normal shot, until you let go of the bumper and use up the rest of your power-up shot.

Beyond it's trippy visuals, easy control scheme, and cool soundtrack (which synchronizes your shots and the resulting explosions to the beat of the music), SIE always keeps you guessing. Bonus rounds periodically pop up, where the enemies cascade down in different patterns. There are boss battles that feature huge enemies that often require special circumstances to kill them (the most unusual of which required you to bounce a shot off an accompanying shield and direct it at the boss. Not easy). In all, the game will take you through five acts and eleven levels of invader-blasting action. You'll also be able to unlock additional styles of gameplay, such as endless mode and the ramped-up extreme mode. Space Invaders Extreme will also have both cooperative and competitive multiplayer for up to four players.

It's been more than 30 years since the original Space Invaders hit arcades. After playing Space Invaders Extreme for Xbox 360, I couldn't help but wonder how players of three decades ago might have reacted to a game like this. Part of me thinks that the constant visual buzz of hyperkinetic action and informational overload--perfectly suited to our overstimulated brains in 2009--would have caused them to go into shock. But then, once you get past all of that stylized glitz, this is still a Space Invaders game at its core. And fun is fun, no matter the year… 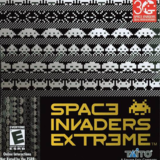