We Just Played Demigod, and Chatted With Chris Taylor

We just finished playing Demigod, the upcoming downloadable online strategy game from developer Gas Powered Games, creator of Supreme Commander and Dungeon Siege. Like League of Legends: Clash of Fates, Demigod will draw inspiration from the Defense of the Ancients mod for Warcraft III. Demigod...

We just finished playing Demigod, the upcoming downloadable online strategy game from developer Gas Powered Games, creator of Supreme Commander and Dungeon Siege. Like League of Legends: Clash of Fates, Demigod will draw inspiration from the Defense of the Ancients mod for Warcraft III. Demigod apparently has a story somewhere about being a divine being waging some kind of holy war, but cutting to the chase, it's really more of an excuse to take control of a single, powerful real-time strategy "hero" unit and stomp all over the battlefield, beating up other little real-time strategy units and other, slightly-larger heroes who have their own powers. 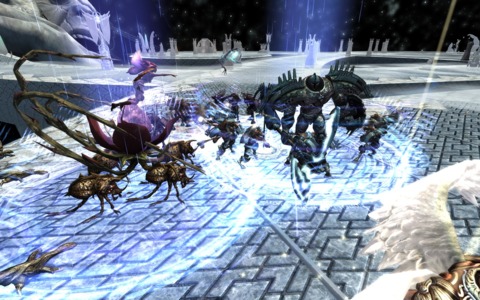 Welcome to Demigod, where your hauberk armor and healing spells will make all the difference. (Unless you suck at the game.)

Demigod lets you play as one of two types of characters, an "assassin" and a "general." The assassin characters are generally a bit more straightforward, since they're devoted to sallying forth and pounding on enemy structures, enemy cannon fodder, and enemy heroes. Both types of characters start their lives on any given map next to a friendly health-and-magic-power-regenerating tower and a shop where they can purchase wearable armor and consumable items such as healing potions and teleportation scrolls. But generals can also purchase up to three different types of additional cannon fodder units that they can summon into battle; these units appear in small clusters after a brief "spell-casting" delay and will automatically attack the nearest enemies. Like in DOTA, Demigod has plenty of cannon fodder units; either the ones that general characters summon, or those that pour out of generators on either team's side, and like in DOTA, none of these units is under your direct control.

Unfortunately, using just about any ability, whether summoning armies, quaffing a potion, or activating one of your character's four magic powers (hotkeyed to the 1, 2, 3, and 4 keys on your keyboard) has an associated delay, so if you're getting slaughtered by your enemies, you'll need to be smart about timing those emergency healing spells and chugging that last-second healing potion and make sure you can survive long enough to benefit from the effect before you fall over dead.

Like in DOTA, your Demigod character starts off at level 1 in every new match, but continuously gains experience points in exchange for dealing damage to any enemies, and constantly killing enemies and capturing conquest points in the "domination" mode (which works like the constantly-ticking-away requisition points in Battlefield 2) nets you a continuous stream of gold that you can use to either purchase more items (or armies if you're playing a general), or to purchase pricey upgrades for allied defensive structures. 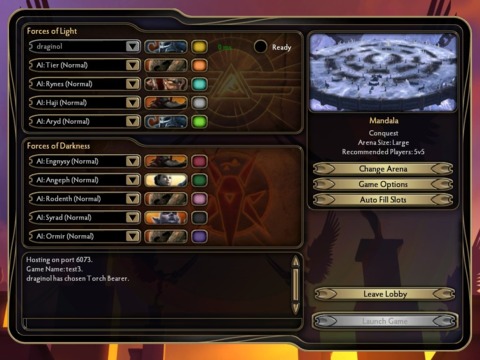 Demigod will be a pretty intimate experience, but the largest maps will accommodate five-players-versus-five-players.


Demigod's ongoing beta currently includes eight playable characters; four assassins and four generals. The assassins that are currently available are Rook, the massive melee juggernaut; Torchbearer, the maniacal fire-and-ice wizard; Regulus, the archer; and Unclean Beast, the...unclean beast, a powerful four-legged melee monster. The generals that are currently available are Erebus, the vampire lord; Sedna, the bear-riding healer; the Queen of Thorns, an evil, half-naked fairy; and Oak, a lumbering giant with defensive powers.All characters have numerous voice samples attached to them that play with every order you give them to help lend them some personality.

Our sessions included brief times with Torchbearer and Oak, first in a skirmish game which we auto-populated with computer-controlled allies and opponents, then in a multiplayer co-op session with Chris Taylor himself as our ally, playing as Unclean Beast. In our first single-player skirmish session with Torchbearer, we quickly learned that this character was a sickly wizard--not a heavy-duty frontliner. The character has plenty of voice samples that play whenever he's given orders--he's got a screechy voice that's clearly supposed to make him seem like a psychotic pyromaniac, but interestingly, he can use both fire and ice magic. All characters in Demigod can unlock new special powers along branching skill trees (unlocking new powers is a matter of gaining enough levels and, each time you gain a level along with a skill point, spending those skill points along certain skill ines). In the case of Torchbearer, he basically has two separate skill lines of fire and ice spells and can only use one type of magic at a time (switching between the two schools of magic requires you to fill up one of your four ability slots with an effect that toggles one or the other on or off).

Our multiplayer session came down to a war of attrition as we joined Taylor on an intimate, two-players-versus-two-players-sized map in domination mode. As Oak, we did our best to frequently summon the neutral armies we purchased at the store (werewolves, clerics, and siege engineers in this case) while using our defensive skills, such as an ability that briefly makes its target immune to damage, to keep ourselves alive. Later, we started investing points along a skill line that improved the health of our cannon fodder followers and healed them after killing off our foes, and through sheer force of numbers and slogging forward (with a telephone receiver cradled under one ear), we finally won the day. 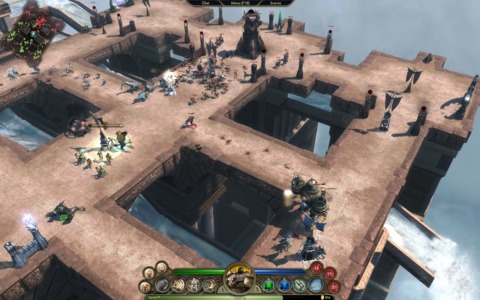 You'll have plenty of chances to crush your enemies and see them driven before you when Demigod launches later this year.

It's possible we might've done better if we weren't trying to get some more details from Chris Taylor himself about the future of Demigod, Gas Powered Games, and his studio's next project, Supreme Commander 2 (which is being published by, of all studios, the Japanese console role-playing publisher Square Enix). Unfortunately, Taylor had come prepared...to not say anything. It's too early to talk about the Supreme Commander sequel, or about Demigod's post-release plans, though it's likely that the game will be considered a "living, breathing" entity with a lot of post-release support that could come from downloadable add-ons, as well as the inevitable patches to help balance out the gameplay. When asked about the state of his studio and his vision for the future, Taylor was pensive; he admitted that yes, originally, Gas Powered was founded to develop marquee PC game titles like Dungeon Siege and Supreme Commander, but that times have changed, markets have changed, and he and his team have explored different directions and grown along the way. For instance, Taylor mentioned he'd "be happy to put Demigod on consoles," as he feels "it would work really well on them," but for now, the game remains a PC exclusive on Stardock's Impulse online download delivery system. It'll be out later this year.