We Just Got Fit With Don King Boxing

The healthy gaming craze continues to explode. On the heels of Nintendo&#39;s Wii Fit, a ton of recent and upcoming games are looking to pick some fruit off the Wii fitness tree. EA is in the game with EA Sports Active , Ubisoft&#39;s got My Fitness Coach , and Majesco put The Biggest Loser star... 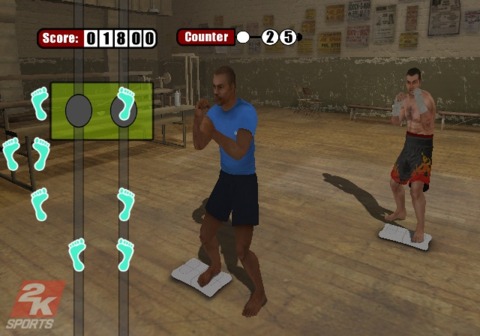 The healthy gaming craze continues to explode. On the heels of Nintendo's Wii Fit, a ton of recent and upcoming games are looking to pick some fruit off the Wii fitness tree. EA is in the game with EA Sports Active , Ubisoft's got My Fitness Coach , and Majesco put The Biggest Loser star Jillian Michaels in her own game . Now 2K Sports is looking to get into the fitness game of sorts with its upcoming Don King Boxing for Wii. Unlike the dedicated exercise games, the fitness aspects of Don King Boxing come in addition to the full-fledged boxing game. A few weeks ago, we went hands-on with the main modes of the game; today we had a chance to check out the training modes in the game.

Training mode features four mini-games: heavy bag, speed bag, fitness, and a jump rope. The first two focus solely on your punching, while the latter pair use the Wii Balance Board (which is optional, of course) and test feature both punching and footwork. With the heavy bag, you're presented with a heavy bag split into four different quadrants. Your goal is to punch a quadrant when it changes from red to yellow; and during the mini-game you'll mix up your punches between upper and lower punches with the Wii Remote and Nunchuk. Lower punches are executed by holding the B or Z button on the Wii Remote or Nunchuk respectively. In the speed bag mini-game, your goal is to punch a hanging speed bag with left and right punches; the timing is tricky on this one, but if you listen for the sound of the bag hitting the board at the apex of its backswing, it makes getting it down a bit easier.

As with all of the training exercises, there are two different skill levels to try: amateur and contender. Amateur level typically involves shorter sessions and less complicated movements, while contender is for folks who have some familiarity with the game's controls are looking to burn some more calories.

Fitness mode is a bit like an cardio kickboxing class, only without the kicking. Here, you'll stand on the Wii Balance Board (after calibrating it, of course) while a sequence of icons runs vertically up the screen. Each icon corresponds to a different type of punch: jabs, straights, hooks and uppercuts. Periodically, you'll also be called on to do footwork, stepping on or off the Wii Balance Board while keeping (more or less) in time with the music.

The final exercise mode is jump rope. Here, you hold the Wii Remote and Nunchuk in your hands and put both feet on the balance board. To begin jumping you lift your heels off the board and begin bouncing up and down, making sure to have your heels land on the board when you come down. To simulate the "rope", you simply move your wrists in a circle, keeping time with your feet. As with the rest of these mini-games, the more successive combos you can put together, the more complicated things will--for example, when jumping rope, you'll eventually move to criss-cross movements with your hands and alternating your feet. Screw up and you'll start over.

You'll earn fitness points after each exercise in Don King Boxing which you can use to track your points on an in-game calendar. There are also achievements to earn if you're particularly skilled at the training exercises. While the punching exercises seemed to be inconsistent sometimes, we have to admit that skipping rope did give our calves a nice little burn. Don King's training mode might not turn you into the next Joe Louis, but it certainly couldn't hurt… much. 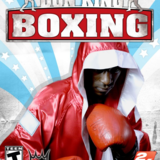