The next N64 game for subscribers joins the lineup this Friday.

Below is a nostalgia-filled trailer to enjoy ahead of the game's release this week. The game is a sequel to 1992's Wave Race fot eh Game Boy, and like its name suggests, it is a jet ski racing game that also has a multiplayer mode for head-to-head gameplay. Shigeru Miyamoto himself produced it.

The game was previously re-released for the Virtual Console on Wii and Wii U. Another game, Wave Race: Blue Storm, came to Game Cube in 2001. 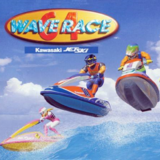