"Every person we find living, they've got some dead with them." In Too Deep is coming soon.

Telltale's celebrated The Walking Dead franchise returns this week with the miniseries Michonne, the first episode for which arrives tomorrow, February 23. Now, the developer has released the launch trailer for "In Too Deep," the first of three episodes in the miniseries. Check it out below.

In Too Deep will be available February 23 for PC/Mac, PS4, Xbox One, PS3, and Xbox 360. It comes to iOS and Android devices a couple days later, on February 25.

The next episode, Give No Shelter, comes out in March, while the series will conclude with What We Deserve in April. You can pay $15 to unlock In Too Deep and the next two installments when they are released.

In Too Deep follows lead character Michonne (played by Orange is the New Black's Samira Wiley), as she joins with Pete and his squad on a ship named The Companion. They are sailing the coast looking for survivors and supplies. It probably won't go very well, if the following description is any indication.

"When a desperate signal for help draws them to a scene of horrific massacre, Michonne and the crew are lead further to the floating survivors' colony of Monroe, which may just be harboring the person responsible for the carnage," Telltale said.

Telltale is also working on a third season of The Walking Dead, but a release date has not been announced. 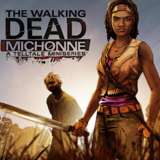