The warriors come out to play in our first look at this historical hack-and-slash game.

Have you ever desperately wanted to play Dynasty Warriors but didn't understand the layers of long-forgotten history buried within? Or do you just hate the Trojans and want to kill them all? Warriors: Legends of Troy is a Western take on the ubiquitous Warriors line of games, drawing on the histories and gameplay styles favored in occidental lands. We got an early look at this hack-and-slash romp through the Mediterranean today and came away with a profound sense of what happens if you anger a Greek god.

The story, weapons, and environments are historically accurate, using texts from Sophocles as well as literature like The Iliad to craft this tale into something worthy of the name Troy. The combat is not quite so realistic, though, drawing inspiration from the early Warriors games. That means there are hordes of enemies to cut through, which is a really hard thing to do in real life. You can cut and gut these mindless minions with ease, chopping out their throats before their tiny digital voices can rise to the heavens. There are a few more formidable foes mixed in, enemies that block and parry and fight like a trained warrior should.

There are finishing moves as well as the standard hacking and slashing, letting you kill your sacrificial foes in style. These include tried-and-true executions such as piercing a dude's skull with your sword, and there's even a lunging strike that pays homage to Brad Pitt from the movie Troy. You can choose to play through the game from either the Greek or Trojan side, with a well-known character from each faction to play as. For instance, Hector battles for the Trojans, whereas Achilles wears a Greek uniform.

Troilus was the boss at the end of this section. Or at least he was the first of two bosses. Though he is favored by Apollo, the god of war, he went down incredibly fast. But that only angered his benefactor. Apollo then inhabited the body of a statue erected in his own image, forcing Achilles to cut him down in style. Slashing his legs, torso, and various extremities put him on the ground, and a God of War-inspired quick-time event let Achilles chop his marble head clean off.

Unfortunately, unlike in some of the more recent Dynasty Warriors games, there is no cooperative play in Warriors: Legends of Troy. But there is a 7-foot-tall Amazonian to play as, which erases even the biggest mistakes. Warriors is scheduled to come out this fall for the PlayStation 3 and Xbox 360. Keep your eyes on GameSpot to see how this epic adventure shapes up. 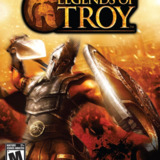