The Hobbit film company picks up rights to make movie based on fantasy role-playing series aimed at attracting new viewers.

Warner Bros. has acquired the rights to make a film based on Dungeons & Dragons, Hollywood news site Deadline reports. The project will reportedly use a script--called Chainmail--penned by Wrath Of The Titans and Red Riding Hood writer David Leslie Johnson.

The studio's ambition is to use the film to reboot the franchise for a new generation of viewers, Deadline claims. It will be the latest high-profile fantasy production at Warner Bros., following Game Of Thrones and Peter Jackson's The Hobbit.

The Dungeons & Dragons film will be produced by Roy Lee (The Departed, The Lego Movie). Courtney Solomon, who directed the 2000 film Dungeons & Dragons, is also on board to produce. That movie starred Jeremy Irons (The Lion King, Die Hard With A Vengeance) and reportedly could have fared better.

No casting details or a release window have been revealed.

Capcom will release its '90s arcade Dungeons & Dragons titles Tower of Doom and Shadow Over Mystara on Xbox Live, PlayStation Network, PC, and Wii U this summer as part of the $15 Chronicles of Mystara Collection. 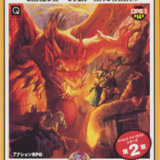