Warner Bros. on lording over Lord of the Rings

In a bit of a pre-Electronic Entertainment Expo blunder, the Entertainment Software Association floated mention of Lord of the Rings: Aragorn's Quest, a family-friendly installment in J.R.R. Tolkien's hallmark fantasy universe to be published by Warner Bros. Interactive Entertainment. The inadvertent reveal ostensibly confirmed earlier reports that WBIE had acquired the rights to make games based on fellow Time Warner subsidiary New Line Cinema's films, rights that were heretofore held by Electronic Arts.

Today, WBIE officially confirmed the existence of Lord of the Rings: Aragorn's Quest, saying that the game will be the first to be released under a new "long-term" partnership with LOTR literary rights holder The Saul Zaentz Company. As a result of the deal, WBIE now has the literary and film rights to develop and publish multiple games based on Tolkien's trilogy across a breadth of platforms and genres. Terms of the deal were not disclosed.

Warner Bros. also offered a number of details on Aragorn's Quest, which is expected to arrive for the Wii, DS, PS2, and PSP this fall. As previously reported, the title will be a family-oriented third-person action game, though the publisher also noted that future LOTR games will be targeted at more adult gamers as well. Aragorn's Quest reflects upon the journeys of the titular King of Gondor, as told by an aging Samwise Gamgee following the conclusion of the events in the novels.

The publisher did not delve too deeply into specifics on the title, saying only that the game will be action-oriented, with players assuming the role of Aragorn as he battles his way through Sauron's legions. The Wii edition of the game, which is in development at Headstrong Games (The House of the Dead: Overkill), will also support two-player cooperative gameplay, where Gandalf joins Aragorn on his adventures.

GameSpot recently got in touch with WBIE president Martin Tremblay to learn more about his company's plans for the Lord of the Rings in the coming years.

GameSpot: New Line Cinema and Warner Bros. are all part of the same parent company, so what took so long for WBIE to pick up the rights to make games based on The Lord of the Rings?

Martin Tremblay: Last year, New Line was combined with Warner Bros. theatrical directly and so it became a part of Warner Bros. for the theatrical licensing. Recently, The Saul Zaentz Company also had the option to partner with us on the literary rights. Thus, Warner Bros. Interactive Entertainment, The Saul Zaentz Company, and New Line Productions have established a long-term partnership regarding the literary and film rights to develop and publish games based on The Lord of the Rings trilogy. As WBIE has grown and more than doubled our lineup since 2008, it made sense to add an amazing intellectual property like The Lord of the Rings to the mix.

GS: What prompted you all to move in on the IP? Why now?

MT: Over the next few years, dedicated fans of The Lord of the Rings will see Warner Bros. Interactive Entertainment publish multiple games across many genres designed to appeal to a wide range of unique gamers, ranging from hardcore role-playing game fans to families who want to enjoy the lore of the property in different ways. All these future games will help us build a strong foundation of top-notch products to build both our business and a reputation for quality games.

GS: Will Warner Bros. be making a point of developing more games based on its film properties in-house?

MT: All the Warner Bros. divisions are open to working together to best leverage our properties. Warner Bros. is an exceptional storytelling company, and we have an abundance of great properties to work with. WBIE is also dedicated to finding high-quality, sustainable new IP that fits our strategy for growth, so expect a balance of both established brands and original IP to be part of our business plan.

GS: How far, exactly, do WBIE's rights extend with LOTR? How do the rights to Turbine's MMOG Lord of the Rings Online fit into this equation?

MT: WBIE has secured the literary and film rights to develop and publish games based on The Lord of the Rings trilogy, which allows us to develop console and PC games across all platforms and genres. Turbine holds the MMOG rights at this time, and WBIE only handles the distribution for the game.

GS: Are you all approaching the LOTR IP as something you can exploit annually? Or, how often do you expect WBIE to release games based on the IP?

MT: WBIE is dedicated to quality product that fits the needs and desires of our gaming audience, so we don't plan to exhaust game franchises. We do have plans to regularly release games based on The Lord of the Rings that meet the demands and desires of the gaming public and also help us achieve our business goals successfully.

GS: What's been the biggest challenge in ramping up in-house game development efforts?

MT: There is a challenge in matching the best technology and game development teams with the right properties so that we can make the best games. We have very strong internal teams and that is how we are looking to overcome this challenge. Monolith Productions, TT Games, and Snowblind Studios are wholly owned by Warner Bros. Snowblind has the technology to make cutting edge RPG games, while TT Games has a great track record of creating outstanding family games that have wide appeal to all gamers. With Monolith, we utilize its renowned technological capabilities for making high-quality first-person shooter and hardcore franchises.

GS: What do you feel is attractive about the LOTR IP from a publisher's perspective?

MT: The Lord of the Rings is among the most well-crafted and revered stories of all time. The opportunity to create video game adventures based on this stellar world and offer high-quality videogames for gamers and story fans will hopefully allow WBIE to continue increasing both the caliber of our products and our reach with consumers.

GS: What do you feel is attractive about the LOTR IP from a consumer's perspective?

MT: For gamers, the opportunity to realistically interact with and take on the roles the of the most fabled characters of Middle-earth, control their experiences, progress against the evil Sauron and his multitude of enemy forces, and hopefully prevail as a result of passion and dedication in first-hand adventures is an amazing opportunity that beckons for them to engage!

GS: Given that so many LOTR games have already been made, how much potential do you think the franchise still has?

MT: The franchise is loaded with potential. The richness of The Lord of the Rings world is such that there are infinite possibilities for new gaming adventures. I am very excited about some of our upcoming games based on LOTR, and when the timing is right, I cannot wait to share our plans for games that will appeal more to hardcore gamers and RPG fans.

And now with WBIE's new game The Lord of the Rings: Aragorn's Quest, we are introducing the first game in the franchise crafted with an explicit goal of helping veteran fans of the story engage younger players in Tolkien's world. Gamers take on the role of Aragorn and learn the great tale of the War of the Ring in way that is accessible for younger audiences, unlike The Lord of the Rings games in the past. It is available for the first time for casual gaming fans with a version build specifically for the Wii. It will also be available on the DS, PSP and PS2. However, The Lord of the Rings: Aragorn's Quest is a game that can be enjoyed by all ages because of the storyline and the gameplay.

GS: How does WBIE plan to differentiate its use of the license from previous rights holders?

MT: Making The Lord of the Rings games for the core gamer, as well as all ages of gamers, is an innovation, and we will be announcing additional titles later that will showcase the innovations and differences. We are looking deeper into the literary world to explore things that have yet to be seen in games for fans of the franchise and gamers of all types.

GS: How much leeway do you have in creating new stories that fall outside the LOTR canon?

MT: WBIE works very closely with The Saul Zaentz Company and New Line to ensure the integrity and authenticity of gaming storylines based on The Lord of the Rings, and we are working to do things that have not yet been done with the license in the game space.

GS: LOTR isn't exactly a dark fantasy universe, but it definitely has its fair share of death and destruction. Why go the family-friendly route with WBIE's first effort with the franchise?

MT: A LOTR title was already released by EA in 2009 for the core audience, and WBIE now has The Lord of the Rings: Aragorn's Quest for gamers of all ages, so we wanted to avoid cannibalization with our upcoming core titles. We will have hardcore games that we want to differentiate from other titles based on The Lord of the Rings, and we hope to surprise consumers and fans with those titles.

GS: Can we expect a Lego Lord of the Rings any time soon?

MT: We don't have anything to discuss at this time. Lego Rock Band and Lego Battles are the games we have currently announced with the Lego franchise. 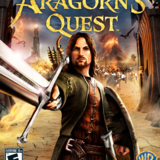 The Lord of the Rings: Aragorn's Quest
Follow
$5.99 on Walmart
Buy

View Comments (197)
The Lord of the Rings: Aragorn's Quest