We revisit the mystical kingdom of Etheria.

The Warlords turn-based strategy series has been around for many years, and it owes this longevity to solid, addictive gameplay that includes equal parts colorful, high fantasy and commonsensical board game-style mechanics. The series has continued to let players command huge empires--governed by powerful hero characters--with a retinue of fantastical creatures. This legacy seems intact in Warlords IV: Heroes of Etheria, the fourth and newest game in the series. We recently had the opportunity to spend some time with a prerelease version of the game, and it seems to have come together well.

Like other games in the series, Warlords IV starts you off with a single hero character who gains experience levels after winning battles. You fight these battles against the armies of enemy players, as well as against hostile monsters you find guarding neutral structures on the map, like unoccupied towns (which can serve as new bases of operations), ruins, and vaults. Ruins and vaults can often house small caches of treasure and can sometimes house a handful of powerful mercenaries who are looking for work. Since all units in Warlords IV--hero and monster alike--gain experience points and levels, if victorious in battle, you're often best-served by recruiting a band of powerful and durable creatures who can live to see the end of a fight.

To do this, you can create creatures in your hometown by paying a certain amount of gold and waiting a certain number of turns for the creature to be generated. As you might expect, more-powerful creatures are more expensive and take more turns to create, though they're usually much tougher and more likely to survive a skirmish. You can expand your holdings by taking over surrounding neutral cities (and eventually those cities controlled by opposing players). To do this, you simply move your attacking army to the gates of that town and attack its defenders. If you're victorious, you can seize control of the town in a few different ways, depending on your army's alignment. The game has 10 playable fantasy factions that include evil races, like demons and dark elves; neutral races, like minotaurs and barbarians; and good races, like elves and knights. If you capture a town whose alignment is close to yours, you may be able to take full control of it (and use it to produce more income and more units for your armies). You also have the option of looting it. If the town you capture belongs to a faction that's of an opposing alignment, you might only have the option of razing it, which gives you a substantial cash bonus but permanently destroys the town.

Conquering and pillaging may be easier said than done. Warlords IV completely scraps the tactical battlefield skirmishes that appear in most games of this sort, and, instead, uses a fast-paced combat system reminiscent of a collectible card game. Essentially, each opposing army "draws" a creature from its marching order, and the two creatures trade blows until one defeats the other. Then the next monster in line replaces its fallen comrade until one army is victorious. As such, fragile creatures placed near the front fight first; subsequently, they usually die first--as cannon fodder. However, the last surviving creature to strike the final blow in battle receives bonus experience points that can bring it much closer to gaining another level. So, you may find yourself carefully lining up your armies based on their attack and defense power, as well as according to your enemies' ranks. You may then find yourself attempting to line things up so that your favorite critter runs the risk of participating in the final encounter against your enemy's toughest soldier, in hopes that it will survive to gaining a level afterwards.

Warlords IV has a few interesting dynamics that govern your armies and their performances in battle. One of these is the game's morale system, which applies combat bonuses or penalties depending on how closely aligned your units are with one another. For example, units that side with the nature-loving elves get along better with those from the chivalrous knights faction, and, therefore, have higher morale than they would if they were instead paired up with the evil undead. Even if you do have access to high-level monsters of differing alignments (either from your own towns, captured towns, or in the form of hired guns), it'll still cost you dearly in terms of turns and gold. Figuring out the right army for the right cost at the right situation may very well pose a unique challenge throughout Warlords IV

Warlords IV recently went gold, and what we've seen suggests that the latest game in the series offers some interesting creature and combat dynamics. The game is scheduled to ship later this month. 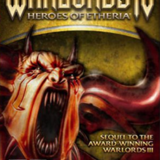