Wario's latest DS romp isn't your typical platformer, but we gave the import version a spin all the same.

Wario: Master of Disguise is a new side-scrolling action adventure coming to the Nintendo DS in early March. After the mustachioed bad guy's series of successful turns in WarioWare games on every conceivable Nintendo platform, we were curious to find out if Master of Disguise would represent a return to form for Wario, whose older platforming games have mirrored the core Mario action series with a few slight mechanical twists. Even though the game is out in North America in a couple of weeks, our curiosity got the better of us, and we imported the Japanese version, known across the pond as Kaitou Wario the Seven.

As it turns out, this one is more puzzle oriented and less jump-on-people's-heads oriented than most Mario and Wario games. Our favorite antiplumber has invented a new device that lets him jump inside television shows, and he's used it to invade a new anime about a thief named Aldente. In the pursuit of wealth and nefarious deeds, Wario steals the magic wand Aldente uses to transform into his master-thief persona and uses it to become the thief himself. From what we've played so far, Master of Disguise is all about running around to collect money and find treasure chests, while dealing with the occasional enemy.

We would have thought the "Seven" part of the Japanese title implied seven disguises for Wario, but according to Nintendo.com, there are actually eight. At any rate, each costume has its own special abilities, though regardless of your disguise, you move Wario around, jump, and duck with the D pad, but every other action in the game is performed with the stylus. In fact, you draw a particular symbol on Wario to change into each disguise. The initial thief costume is particularly agile, as thief Wario can run quickly and jump pretty high. He also has a shoulder-dash ability that you use by tapping in front of him. To become the thief, you simply draw a quick check mark on Wario. And astronaut Wario, for instance, moves more slowly, but he has a jetpack that makes him descend more slowly as well, and he can use an omnidirectional ray gun that you aim with the stylus. To change into the astronaut, you draw a circle around Wario's head, in the shape of his glass space helmet.

Though we've only seen the first level so far, it seems like the disguises' special abilities will come in handy in solving puzzles and helping you access new areas. For instance, there are some lifeboats hanging from the roof of one section of the cruise liner, and after you get the astronaut costume, you can use the ray gun to shoot the chains holding up one of the boats to knock it down and then use it as a platform to reach a ladder leading up to the next floor. We've also seen some red boxes marked with a flame icon, and given that later on you'll find a Godzilla-like disguise, we're pretty sure that suit's fire-breathing ability will come in handy in places like this. The first boss fight featured Aldente piloting a hovering robotic vehicle and launching bombs at us, and this encounter required us to quickly switch back and forth between thief and astronaut suits to use both of their abilities, too.

As we mentioned, finding treasure chests seems to be a big part of the game, as there are quite a few just in the first level (set on a cruise ship). Attacking a chest will start one of a variety of minigames, and if you successfully complete it, you get whatever's in the chest. Most of the boxes only contain treasure, from what we've seen so far, but we did pull the second disguise, the astronaut, out of a special green chest, so we imagine some chests will have more costumes and other unique goodies as you progress.

The minigames themselves are all touch-screen based, are designed to be completed in about 30 seconds, and are generally pretty easy to finish successfully. (In fact, the only real stumbling block we've hit with any of them is sometimes figuring out what we're supposed to do, given the instructions are all in Japanese.) In one of them, a bunch of objects such as baseballs, gems, and onions fall from the top of the screen, and you'll have to drag them sideways so they fall into the appropriate receptacle (glove, treasure chest, and mouth, respectively). There's also a simple numbered connect-the-dots game that you have to complete in a short time. Another game presents you with a colorless image and a color palette, requiring you to color in the blank sections with the right colors to match up to the image you see initially. Once you know what to do, these games are pretty hard to fail, and it seems to us they're in place to provide a little entertainment value when you open a chest, rather than acting as a serious obstacle to gaining the treasure. They've done a good job of that so far.

Master of Disguise isn't like your typical Wario platformer, since there's not a whole lot of actual combat that we've observed so far. But between the different costumes, the multitude of minigames, and the various puzzle solving, it seems like there will be a lot of variety here, depending on how long the game is. The game isn't very import friendly, since it's chock-full of Japanese text with no English accompaniment, but considering it's out in English in just a couple of weeks, why would you want to import it anyway? 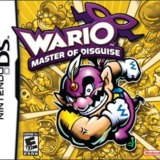