War of the Rings golden

Soon, the final battle for Middle-earth will be raging on PCs worldwide, now that Lord of the Rings: War of the Ring is gold. Publisher Sierra will announce tomorrow that the game, developed by Battle Realms creator Liquid Entertainment, has gone to manufacturing and will ship to stores on time, in early November.

A 3D real-time strategy game inspired by the classic Lord of the Rings books, War of the Ring will let gamers wage war in a variety of ways. In single-player mode, the game will follow a loosely linear timeline taken from Rings' author J.R.R. Tolkien's writings. In multiplayer mode, gamers can choose whether to resist or join the orc-filled hordes of the dark lord Sauron. 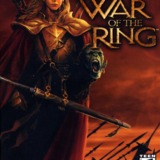