We take Wallace and Gromit through their paces in their next video game adventure.

Wallace & Gromit: Curse of the Were-Rabbit is a game based on the movie of the same name that's coming out later this year. The claymation comedy duo seem to have settled into their game lives well, from what we saw playing the PS2 version of the game at Konami's press event. Curse of the Were-Rabbit is a neat little romp into the world of Wallace and Gromit that it looks like fans will be able to readily appreciate.

The nutty inventor and his patient and faithful pooch are tasked with the duty of ridding their town of a mysterious rabbit infestation. What's worse, though, is that the fluffy beasties turn into were-rabbits at night, terrorizing residents and their prized pumpkins. It's up to Wallace and Gromit to make things right again, by means of a number of crazy inventions as well as their combined ingenuity. The game supports two player cooperative play as well as single player, though even in single player you'll be able to switch characters and direct your companion. In addition to the two stars of the show, Hutch the rabbit rounds out the playable critters.

The game features a number of odd jobs and challenges to overcome, many of which have to do with somehow capturing or containing the explosion of rabbits running amok. Dealing with the troublesome pests is ultimately accomplished by uncovering special vacuum vents that suck the bunnies down to places unknown. You'll be able to either physically herd rabbits into such vents by running along behind them, or at worst you'll have to gather them up using a device called the bun gun. The bun gun is also vacuum-powered and will suck up just about anything, though rabbits wedge into the nozzle quite nicely. You can use the gun to pick up rabbits and then shoot them into a waiting vent, which is just as amusing as it sounds.

Your partner character will be able to assist you in various ways, like opening hiding areas and allowing you to gather up the waiting bunnies, or pulling the cover off a switch that you can flip to get through a gate. Which character you'll have with you depends on the time of day, as Wallace is only able to come out during the day, while Hutch is only able to come out at night (Gromit works the double shift, as he's a stoic canine). You won't have to hang around Shenmue-style to wait for time to change, either. You can step on a sundial to switch the environment from day to night, and back again.

While the only device we used in our time playing was the bun gun, there are other helpful items you'll receive in the game. One is the bunny-hopper, which resembles a giant balloon that you can hop on and then use to bounce around, which is handy for either travel or pounding things beneath you. We also saw sequences featuring a small plane that Gromit was flying, so it looks like there should be a good mix of gameplay types. We primarily were able to control Gromit, who is able to double-jump, wall-jump, break objects by swinging his gun, and gather up objects with vacuum power.

The Claymation look translates well to Curse of the Were-Rabbit, with well-made, expressive characters that move smoothly and naturally and environments that are simple but have a definite style to them. The voice acting in the game sounds very well done, and the various sound effects and tunes seem to be rounding the package out well.

Wallace & Gromit: Curse of the Were-Rabbit is due out for the PlayStation 2 and Xbox consoles a bit later this year. So stick to this space for more news on their adventures. 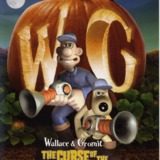 Wallace & Gromit: The Curse of the Were-Rabbit
Follow
$27.00 on Walmart
Buy

View Comments (1)
Wallace & Gromit: The Curse of the Were-Rabbit