Nick Park's lovable claymation duo are the heroes of this platformer from Bam Entertainment.

Bam Entertainment will be showing off a new platform game at E3 2003, starring the Oscar-winning, animated characters Wallace and Gromit. For those unfamiliar with the hapless inventor and his clever dog, they were created by British artist Nick Park, who shot to fame in the United States for his work on the film Chicken Run. It was Park's work on the Wallace & Gromit short films that gave him the opportunity to direct the Chicken Run feature film.

The animated shorts, filled with a distinctly British sense of humor, have been a hit with children and adults alike thanks to Park's well-developed characters. Wallace is depicted as a clever, yet naïve, inventor with an extreme affinity for cheese and tea. His gadgets are designed to simplify everyday life, but unforeseen consequences frequently get him in a good deal of trouble. Thankfully, Wallace's preternaturally intelligent dog, Gromit, is always ready and able to bail out his owner from danger.

In the game, Wallace and Gromit will be pitted against Feathers McGraw, the penguin villain who originally appeared in the short film The Wrong Trousers. Feathers has taken control of the local zoo, kidnapping all the baby animals in an attempt to coerce their parents into helping him operate the diamond-o-matic, a machine that can manufacture diamonds.

You'll take control of Gromit, running, jumping, flipping, swinging, and sneaking your way through 24 different missions throughout the zoo. Wallace will help out with advice and, of course, will provide plenty of wacky contraptions to help Gromit battle the evil penguin. Gromit can wield a variety of zany weapons to combat zookeepers, henchmen, and evil monkeys. These include a porridge gun, a coal flinger, a banana launcher, and a turnip cannon. Special items such as springy boots will help Gromit traverse the various levels.

Wallace & Gromit is being developed by Frontier Development, which was founded by David Braben, developer of the classic PC game Elite. The game will be published this October by Bam Entertainment, for the PlayStation 2, GameCube, and Xbox platforms. We'll have more information on Wallace & Gromit as it becomes available. 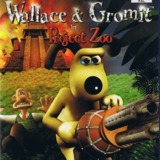